Kicking Up My Heels 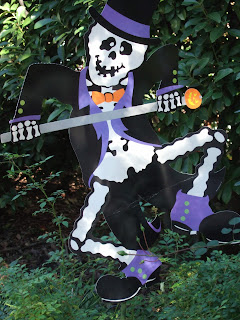 Full day which started at the WACK exhibit at the National Museum of Women in the Arts, included a reception for Verteran Feminists of America and practicing Halloween stories for tomorrow. 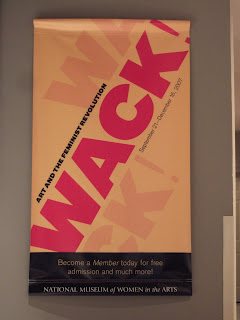 The day started at the WACK show. 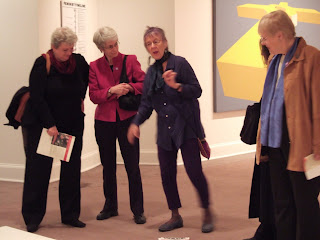 Art Historian Josephine Withers, Professor Emerita, Univeristy of Maryland, led a small tour through the exhibit. She shared her special insights of the works and the atists.

Josephine has been involved with the women's artist movement since the beginning in 1971. She was one of the organizers of the Corcoran Conference in Washington in 1971. That conference brought women artists from across the country together for the first time. It was the start of a national network of women in the arts - artists and art historians - and the artistic dialogue which set the stage for the creation of the works in the WACK show.

I am indebted to Josephine for her role as a founder of the Washington Women's Arts Center. More than an exhibition space, the Center was a training center where women in the arts worked together to learn the business of being an artist. WWAC, as it was known, was the place where I found me self as an artist and formed networks and friendships that are still important to me.


Reception for Veteran Feminists of America.

Mary Garrard and I had our picture taken beside the bust of Susan B. Anthony. Mary turned to me and said, "you and me and Susan B." Mary and I have known each other since 1974. I was lucky that she was my art history professor at American University and that I also worked with her as Secretary when she was President of the newly founded, Women's Caucus for Art. She was at the start of her distinguished academic career as a feminist art historian and thought leader. WCA an was the organization that launched my journey as an activist feminist working for equal rights for women in the arts.

It was an exciting evening - a trip down memory lane - which was held at the Sewall Belmont House, formerly the home of suffragette leader, Alice Paul. More than 200 attending. I was completely surprised that the women in the book,Veteran Feminists of America, identified as the evening's "honorees", were invited forward and presented a VFA Medal of Honor. We were called "pioneers" of the second wave of the women's fight for equal rights.

Former Congresswoman Pat Schroeder opened the program. She talked about the first time she came to the Sewall Belmont House when she was newly elected to the House in 1972. She told us that at that time a few of the elderly suffragettes ( in their 90s) still lived on the 3rd floor floor of the house. She said she mentioned to someone that she was surprised they owned a house for the "movement" and they instructed her in a bit of history.

In the days of the battle for suffrage women signed up to come to Washington for a month at a time to keep vigil at the White House. They came to demonstrate for women's right to vote. At that time it was not proper for a woman to stay in a hotel unchaperoned - so the Women's Party bought this house and they lived here while they were in Washington.

They picketed by day - often chaining themselves to a fence in front of the White House - often being arrested - but if they were not arrested they came home to the Sewall Belmont House in the evenings for dinners, company and perhaps a piano concert. Agitators by day; genteel ladies in the evening.

It is important to know your history.
Posted by ELLOUISESTORY

Thank you for sharing your experiences and photos regarding the Feminist movement in Art History. As a senior art history major writing on The Dinner Party your blog was inspiring.