When I wrote the proposal for a new work I did not think about how it would feel to receive the grant and then have to create the work I said I would. leap without looking - that's my way.

Usually I start a story because its something that interests me or pops into my head. This is so planned. Now I find myself poised at the edge of memory - wondering how to approach the story of my feminist journey.

Don't mis-understand - this is a story I want to tell. I was one of so many women of the 1970s that the story will resonate with their experience or perhaps explain the time to young women today who have no idea what hapened or why women got involved.

Earlier this week I received a letter - "mark the date" - October 2008 - the national reunion for Dunbarton College of the Holy Cross. My alma mater closed in the 1970s. The buildings were sold to Howard University and its now Howard Law School. They will let us come back. I circled the date.

Dunbarton College - yes - that's a good place to start. I was a shadow feminist when I arrived. I graduated an activist. In 1968 when I enrolled at Dunbarton as a Freshman I had three children in elementary school. I often sat in class on Thursday afternoons looking like the Jolly Green Giant in my green Girl Scout Leaders uniform.
1968 was the beginning of women returning to college. I was one of three married women in the college. Later this trickle turned into a fast moving river flooding colleges across the country.

Old photos are always a good place to start.

I remember this day. 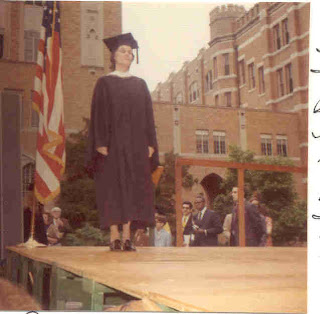 Jim was beaming - playing a new role - husband of the graduate. I hardly recognize him with his beard. 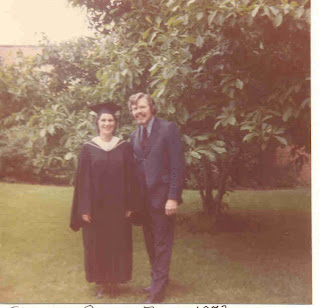 Mom and the kids - Karen, Robin and Jimmy. They had helped me earn this degree as well and my being in school had cost them an "at home" Mom. Times were changing. we had no idea how much. 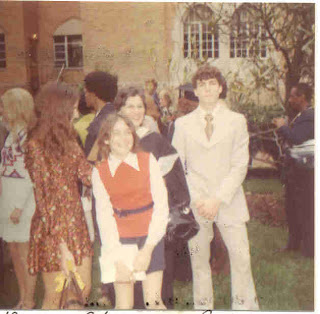 I went back to college as a Freshman in 1968, thinking that I would take a couple of courses. By the second semester I had registered as a full time student. I wss hungry for the work. New worlds opened up. I had not realized how much I had missed out on - education wise.

Life was changing.
Posted by ELLOUISESTORY

Indeed. 1968--I was a senior in high school, quitting to get married and have children. I was on the old track, you were on the new. It took me a few more years--and four children--before I began to look at my life and my role differently. You were far ahead of most of us, Ellouise!