Last night Robin Moore left all contestants in the dust in the Ghost Stories Contest.

I have to admit I felt kinda sorrowful about that. Not that he won - he is a terrific storyteller - but where there is a winner there has to be a loser - and I don't like being one of those.

So- Today I entered the Liars Contest. First time I have ever competed to be a LIAR. I knew I have a story that fit the category. 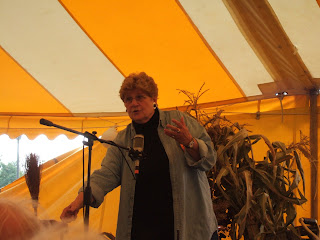 It was ready because I have told it at the Speakeasydc and a couple of other places.
(you can listen to an earlier version of the story on my myspace page.)
The audience really understood a bad hair day and my story went over really well. Then a first timer stepped up, told an internet joke with such good delivery that Robin and I ended up taking 2nd and 3rd place behind her.

When they introduced the three winners we were called back in reverse order: Ellouise Schoettler - the BIG Liar, Robn Moore - the BIGGER Liar and Shirley Fetchco- the BIGGEST Liar.

One question - how do you explain those titles to your grandchlldren.

Its on the record in the York County Record - notice who in opur family gets the most space - Jim.

Gail Herman, a featured teller, on the left with Lara Ackerman from Arizona who was a strong contender in the Liars Contest and Hillary Clemens from Kensington, MD. Meeting new people and connecting with folks you've met other places makes for all the more fun. Hillary and I had met at the Kensington Story Salon and so we'll be seeing each other again. A treat to re-connect with storyteller, Kathy Long from the LeHigh Valley Storytelling Guild, Bethlemhem, PA and Jean Pitt, from Manasssas, VA. 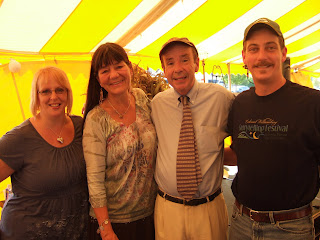 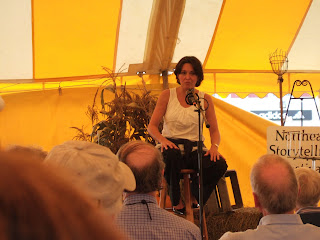 You know there are no stories without people to hear them and this was a grand group of rapt listeners. The featured storytellers gave them high quality performances.

Its hard to leave when the stories have been so fine. Looking forward to next year!

But as good as all that was - I keep thinking about something else. A woman I had met before came over and spoke to me. After the casual preliminaries she asked me, "are you still collecting ghost stories?" 'Oh, yes." At that she reminded me of her offer to share some of her personal ghost stories with me. " you haven't called me."

While we talked she told me of some of the encounters with spirits of the departed that have occurred in her family.

This morning I woke up thinking about her stories. I have her phone number. Not missing the chance this time.

TIP: Don't pass up an offer when someone say they will share stories. You may not be as lucky as I feel - to have your paths cross a second time.
Posted by ELLOUISESTORY

Do you know where I can find a repository of Southern "lies"? I have grown up listening to my elders swap these stories. I wanted to start collecting some more so that I can share the same experience with my children.

You might start with "Jack" stories. Richard Chase has a collection. Check out the audio stories of many tellers on Storyteller.net to prompt your memories. My best advice is to tell your children your memories of what you heard in your family. Ellouise