Trip to the Holy Land

In June I began collecting bits of memory to remind me of days of my life so I will have plenty of material for my memoirs.
Memories for Memoirs is a way to add smaller bits which I may use as "further flesh" later.
As I remember more I will add it.  Either added to this piece or on its own as another numbered post. 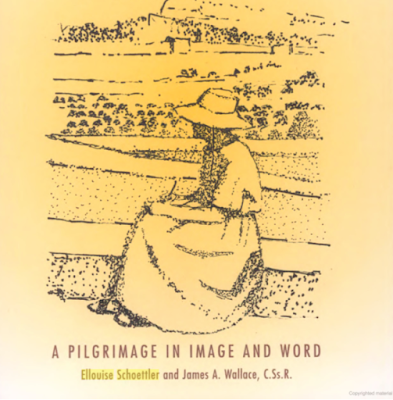 About A Pilgrimage in Image and Word -


Meditating on the Mount of Olives.

My husband, Jim Schoettler,  took this picture of me on the Mount of Olives early in the morning when we were on a trip to Israel with a group led by Reverend Larry Boadt, a Biblical Scholar and a Paulist priest. I knew Fr. Boadt because at that time I was working as Secretary to the Dean at Washington Theologial Union where he was on Faculty.  When
he asked me if we were going to make the trip with his tour.  I hesitated and then told him I scared of going to the area - "its dangerous". Larry laughed and assured me "I will pray you back, Ellouise, and then you can do a book about the trip." Obviously Jim and I went and it was a fabulous pilgrimage. I used Jim's photo for the cover of the book.  Larry invited Fr. Jim Wallace, C. Ss. R. and me to create a book based on our experiences on the trip for Paulist Press.  I was thrilled for the opportunity. The texts Father Jim wrote for the book are wonderful. I used photos I took as the basis for the drawings.
I guess that means I can call myself a published artist. 1995

More about the trip to the Holy Land

In Facebook posts the last few days someone is sending pictures from Israel while they are on a trip to the Holy Land. Today they posted a picture on the Sea of Galilee.Seeing the pictures brought on a flood of memories of the trip Jim and I made more than a dozen years ago. The images are still so vivid. I felt very fortunate to find this post about the trip. It brought back many memories.We arrived in Jerusalem, and then in the next two to three weeks of our tour we moved on to the Galilee, to Mt. Nebo, by way of Petra in Jordan, and then we crossed into Egypt for a trip up Mt. Sinai ending with another few days in Jerusalem. It was wonderful!Our tour leader was the incomparable Biblical scholar and Paulist Priest, Fr. Larry Boadt who could be counted on for inspiring sermons and enlightening teaching of the archeology and holy sites. And, lots of laughter.I am so grateful to have shared the trip with Jim.  There are many sweet and touching memories and a few that are completely hilarious.When we were at the foot of Mt. Sinai the plan was to climb at 2 am so that we would arrive at the top for sunrise. I knew I could not walk up so Jim hired a camel for me. I was game because I really wanted to climb to the top and share the early morning Mass with the group. It turned out to be quite an experience. The camel driver left the path and in the intense darkness I have no idea whether we were on a well-trodden way or not. I could see our group - including Jim -some distance away with their flashlights bobbing as they walked. The camel stepped carefully and the driver cooed to reassure him he was doing a good job. Initially I was nervous - no - I was scared - and then I began to really see the stars - so bright in the inky sky. It was as though we were on that mountain side completely alone. It was glorious.Jim reached the concrete dismount at the same moment the camel knelt beside it and the driver said, "Madam, throw your leg over the side." Was he crazy? After two hours on the back of the beast I could not move my leg. Fortunately for my modesty it was Jim's hands Jim reached up and lifted me down.We were on the top of Mount Sinai at sunrise which is an indelible memory. On the way down the group stopped at an outcropping clearing where Father Boadt said Mass and we had Communion. A blessing.For the years afterwards when Jim and I heard or read certain Gospel passages we would look at each other, smile and nod. Nothing else was needed.My heart aches for that closeness with each other's memories.