One morning my phone rang early and I heard my cousin Jim's voice.
"Hey"
"Jimmy - how great to hear from you." The phone is a blessing.

A conversation with Jimmy was just what I needed on another self- isolated day - hoping that I would never catch the virus that was loose in the world. I told him I was writing a bit about our Nanny - Marie Louise Cobb Diggle.

I had always thought she was a fascinating woman.  This call was pure luck because I could ask him about our grandmother and his memories would water mine. 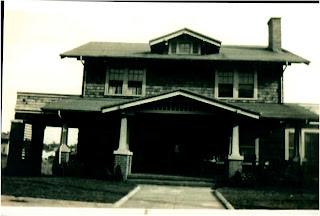 "Jimmy what's your best memory of Nanny's house on Central Avenue?"
The quiet fell between us as he thought where to start -
"I always think of the fire first."
"You do? Why? That fire under the breakfast room wasn't exciting."
"No. I am talking about the day Tommy and I were making bombs in the garage and it caught fire.
Nanny had a fit and called the firemen and the police came too."
We started laughing and laughing and it was as though we were children together again.
He asked me,
" Do you remember that refrigerator? It was specially made to fit the whole wall in the breakfast room. There wasn't just one door - there were nine small doors so getting to the food was a search. Ofcourse I remembered.
"Nanny kept her vegetable leavings in a jar in the refrigerator until there was enough to make her delicious soup."
Jimmy and I talked and talked and talked.

I told him about my night with Nanny at the Visualite Theater.
" I was surprised when Nanny invited me to come with her to the Visualite Movie on Elizabeth Avenue to see a British movie, The Lavender Hill Mob, starring Alec Guiness.
I had never seen a British movie. I was a Junior at Central High School and considered myself reasonably sophisticated for an evening with Nanny. 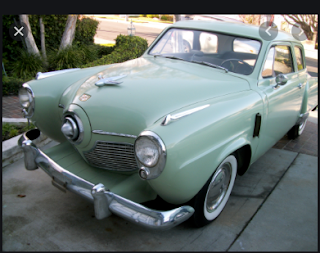 I walked through her front door in time. She was wearing her usual slim grey wool slacks and a matching sweater with her long string of white pearls knotted around her neck. She slipped behind the wheel of her new sleek green Studebaker. We started out early to get there early. This was 1951and she wanted to one of her smoke red beauty tip Marlboro cigarettes before we settled inside.

Lights down, previews played and then the Feature Movie. Her daughters, my aunts, called her an anglophile. "Mama loves to read British mysteries and magazines." Within five minutes after the movie started Nanny  began laughing out loud- - and so did I. It was a different kind of comedy for me.  I was caught by it as we sat in uncomfortable seats for 88 minutes.

As the lights came back on Nanny picked up her bag. She leaned over to me, "well, what do you think?"
" I loved it - so funny. Thank you for bringing me."
We giggled as we walked down the crowded aisle leading to the lobby..

Outside Nanny pointed to her car in the parking lot - laughing she said " ah there she is --
Mrs. Bufforpington - just where I left her."
That was her name for the new car and she loved saying it.

These days I often wear Nanny's long string of cosmetic pearls when I tell stories - especially about.