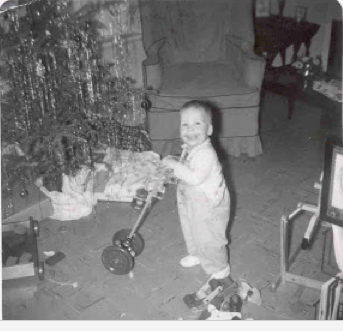 This is our son Jimmy, Christmas morning  in 1957. He was one year old and we were living in Brooklyn, NY.


Who could have imagined years later on this morning in 2015 he would send me a TEXT MESSAGE saying-
"landed Munich." Its not the first time - its the first time I did not take it for granted.

Bits like this force me to acknowledge the changes in the world we live in today from the world I thought I knew those years ago. Jim and I could not TEXT the first time we flew overseas. Next day we spent a LOT of money calling home to let the kids know we "landed London." Thanks to technology we can connect in seconds from where-ever we are without plugging coins into a telephone.

Would you go along with me in thinking that not recognizing the changes is what creates problems between the generations?

Glad I could TEXT BACK - "hope the trip goes well."

What's an even bigger change - my son is traveling on business and he will be home in three days.
It often took several days for me to get over jet lag and culture changes.


Oh, did I mention one of our grand-sons often jets in to SF from Europe, does his laundry, and flies out to "down under".

Today is sometimes incomprehensible to me as I poke on down to the Safeway in my faithful Toyota Sienna, knowing parts of my family are cruising at 30,000 feet over-head.

And, only God knows where Jim is because Jim is not Texting in.