A Gardenia on My Mind 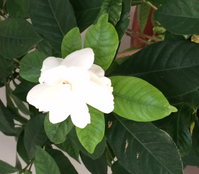 Welcome back!
After almost two years the gardenia plant is blooming.


A friend sent this plant to me in March 2012 as a sympathy connection when Jim died. It came in a box. I transferred it into a pot and it bloomed. It was a bright spot during some dark days.

After a while it tired. Its perfume grew faint and the blooms turned brown and dropped off.  It gradually shed all its leaves and was just a stick in the pot. I thought it was gone for good. Until a wise woman with a healthy green thumb took over a year ago and brought it back to a green leafy life.  It has grown and promised blooms since then but none ever opened until this week.

This is the first of three buds to open to show its lovely, soft white petals and to release its familiar scent which brings back sweet North Carolina memories.

My memory that comes to mind first is of a summer night in Monroe, NC.  The bedroom was lit by by moonlight and I was slipping into sleep in a comfortable bed in a strange home where I was a guest for a few days.  Near the bedroom window a large, years-old, gardenia bush was in full bloom. The intoxicating perfume filled the air in and out side the house.  It triggered my 13 year old imagination to times described in the Old South novels I loved to read.

Perhaps those romantic images were also stirred by the stories of the long-gone glory days of the Confederate South we listened to during the day. I was in this foreign town 20 some miles from home in Charlotte to attend a State gathering of the Children of the Confederacy. We were all teen-age descendants of those days.

My grandmother's father was a 16 year old water-boy in a regiment of locals named The Mecklenburg Farmers - which is what they were. He was injured at the Battle of Petersburg, Va, imprisoned in Southern Maryland and walked home at the end of the War. His name was Thomas Milton Hall and he is buried at the Philadelphia Presbyterian Church in Mint Hill, NC. I never did think about his soldiering or his war very much. He was what today we call "a grunt" in the Army. I can imagine he joined up because he wanted to be part of the excitement but all he gained was a hole in one hand and a ticket to sit on the porch with the "big boys" and talk about marching off to war.

My gardenia also reminds me of the small wristlet corsages that were popular for school proms and teen-ages dances in the 1950s. Orchids were too expensive for a boy's budget so the gardenia was an affordable choice. I always liked the small white gardenias best even though they were fragile and gradually the edges of the petals turned brown and looked tired as the evening wore on. But the perfume never faded. It still lingered on your clothes next morning.

As my gardenia opens now I breathe in it's perfume I think of three years ago and those sad days but somehow it also brings a reminder of the friendship and comfort so many people shared with me so that I could reach today where I can once again appreciate the gentle beauty of this fragile flower.