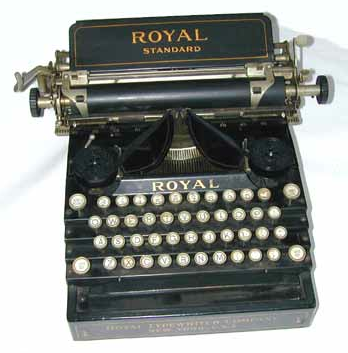 I loved the one that sat so temptingly on my grandfather's desk in his home office. Before I could say my alphabet I loved to climb up on his desk chair and hit the keys - making a noise as it made a mark on a piece of paper.

After my grandfather died that typewriter eventually became mine. Talk about a bit of happiness. By that time I made those marks to make words and tried writing things that made sense only to me.

Shortly after Jim and I married we bought an old upright typewriter at the Goodwill in Baltimore.  I am sure we could not have paid more than $20 dollars for it, if that much, because we would not have had more money than that. Jim thought he would write his medical papers on it but he had never taken typing and his large, warm, steady hands were constantly thwarted by the machine.

I never took a typing course in high school either but my hands have always been so much more agile when playing with the clacking typewriter keys than when I tried to make music on the piano.

Jim worked long hours in those months of medical school after we were married. I was a lonely bride
adjusting to this new life alone in our apartment. Many hours the typewriter was the reassuring noise that kept me company. Writing letters, stories and articles. I even sold several for only a few dollars but it made me feel more productive than the day job I had at the hospital. That's how the seed of the the idea that I could create something from inside my head was planted.

There have always been typewriters in our home. Many. They changed over the years from the old upright, to the sporty blue portable, to the wondrous IBM Selectric of the 1960s, 70s and 80s. Who ever thought anything would eclipse the Selectric - but the computer came along.
Even though it was silent, it had seductive skills of memory which lured me away from my old typewriters.

Our first computer was a "luggable" which I could hardly lift. These days I carry a mini-ipad in my purse so I can sort-of type on a touch screen where ever I am.

But its not close, not even close,  to the wonderful sound of making noise on an old upright - a real typewriter.

That's why I keep all our old typewriters - just in case!

Sweet memories! I gave away my spiffiest typewriter to a student who spoke longingly of the typewriter she MIGHT get for Christmas. I had to wipe dust off its case because the computer had taken over my writing. I do still have somewhere the first typewriter I owned, not useful, but sentimental.
One can get an app to duplicate the sounds, and I believe there is also a way to attach a keyboard that works like a typewriter. I haven't looked into either, but I do remember.