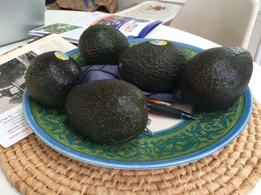 A plate of avocados!

My daughter went shopping at Costco - the store where you cannot buy just one of anything. She came home with a green plastic net bag of these delicious treats. Are they fruits or vegetables? Really doesn't matter. We will have them eaten and gone before that is settled.


I did not always like avocados.
I had never eaten one until I was married.

Jim loved them. Raised in California he was used to them on his family table in a salad or smashed into guacamole. His family is not Latin but their taste buds often craved all things from across the border.

The first time I was served guacamole was at the Original Mexican Restaurant in San Antonio, Tex. It was recommended for having the BEST. This was before Riverwalk and the re-do of the river. Although it was not in a great location the parking lots were filled and it was packed with people.

Jim was eager to have some "real" Mexican food and to introduce me to it. I was shocked when I discovered that the pile of green slime smeared on my plate was absolutely delicious. Ever since it has been a favorite.

I am so changed about avocados that I also love biting into an almost over-ripe avocado - - - just plain.

No, these won't be on this plate for long.

Would I be eating avacodos today if I had not met and married Jim? I doubt it.

I know he would not have acquired a taste for okra without me - so I have to say "no, probably not."

Just saying - there are layers of dear and wonderful things in my life that would not have been there if I had not boarded a train for Baltimore, MD to go to school and met a guy who had driven across the US to do the same.

Jim would be as saddened  today as I am over what is happening in Baltimore now.

below it that finally erupted.