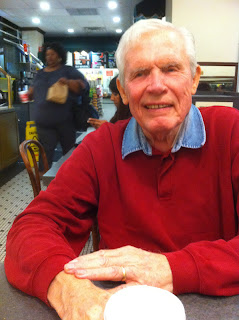 Jim is with us "in spirit" this Father's Day. You can be sure we are all thinking about him.

This picture was taken last year at Grace's - the deli at 2141 K Street - the downtown office building where Jim often received his chemo treatments. 2141 K Street is also the building where Jim worked in his first Washington, DC position upon leaving the Air Force in 1968. He often ate lunch in this very deli - Life has a strange way of drawing connections across the years - especially if you stay in the same place.

Making connections is something Jim and I enjoyed  - and so
does our family. The best gifts are often the gifts of memories.
So:

1.Robin called from CA to wish Jim Happy Father's Day. She read him a letter he wrote to her in 1982 when she was living in New York City. He was writing to console her when she was going through a rough patch. Keeping the letter then reminding him he had been there for her.
A touching gift.

2. Inspired by Robin we gave Jimmy a letter he wrote to us in 1987 when he was living in Germany. There is material for several stories in the letter - the more so because we all know what happened several weeks after he wrote it and mailed it to us. He was delighted. "Hey, I forgot I had that Casio battery powered mini typewriter. " After reading it aloud he pronounced. "This is a keeper." Yes, we know. We have kept it for 22 years.

2. Even older letters:
A grandfather writes to his grand-daughter.
There was so much to love about a letter I found at the DAR library 20 years ago when I first began my genealogy searches that I have kept it safe. There is advice and inspiration for stories. I use it often in storytelling workshops.
In 1893 Mr. James Parks answers his grand-daughter about their family history who has written asking about their family. Excerpt -
He ends the letter with this statement: 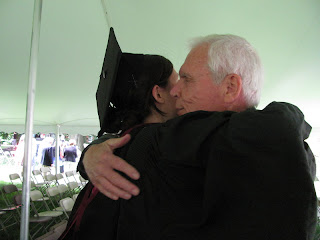 " You will see that there were no great ones among our ancestors. They were all in the common walks of life, no blue-blooded aristocracy, but just upright, high-minded honorable men and women. If there were no"great ones" among them, there were none of who we were ashamed.
September 9, 1893 (signed) James Parks


Jim was a great hugger. Here he gives grand-daughter Juliana a big bear hug at her Graduation from Washington College in 2009.

We are missing those hugs today.
Posted by ELLOUISESTORY