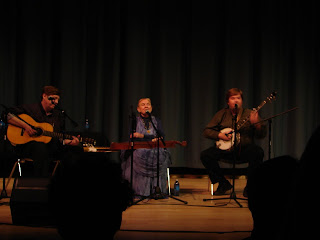 The line formed outside the Palace Theater on Main Street a half hour before the doors opened. We were there to see her sons help Jean Ritchie from the car to spontaneous applause from those in line. She nodded, smiling at the welcome.

When an icon take the stage you know it. Jean Ritchie brings a presence and grace that lights up the space around her. The combination of her years of performing with her earned years - is elegrant.
When she is joined on the stage by her grown songs she glows and its fun to watch the easy affection between the three.

Her voice is not what it was - and why should it be - she is now a matriarch of folk music and her stories are a rich legacy - a slender connection to a style of simple life that is disappearing.

Whether she was singing or telling stories of her growing up, the youngest of 13 children, in a singing family in Kentucky - she had my full attention. 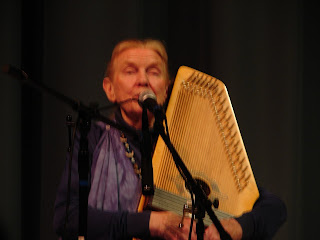 She sang " play-party" songs from her youth, gospel songs, ballads and her famous Black Water, the hauntingly beautiful song she wrote about the destruction from strip mining.

Jim and I agreed - we will never forget the evening and are grateful we came. 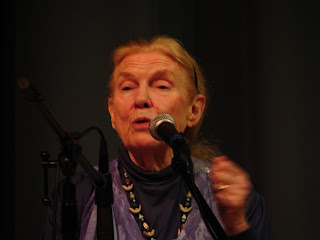 Jim and I came to Frostburg because I was telling stories as part the Frostburg State U. Appalachian Heritage Festival along with Susannah - Granny Sue - Holstein and Katie Ross.
And telling tall tales with them was as much fun as I expected it would be. 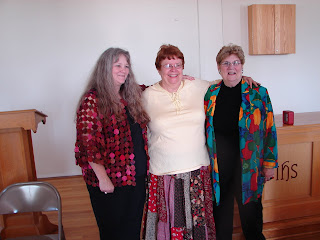 We were pleased to have an audience with us for the full 90 minute set. That's really liking stories because there is so much else that calls for your attention at a festival like this - where the smells from fired up grills fill the air, music from the tents and from the impromtu fiddle groups that pop up and the thoughts of the crafters in their tents - all pulling at you.

But this was a festival celebrating folk-arts - not a theater performance. There was room for it all and we were richer for it. 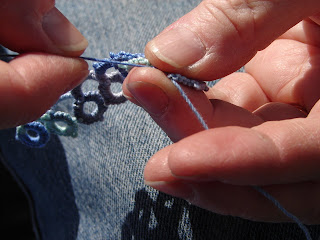 Personally I was drawn to the crafters tent - particular to the tables of the women demonstrating needle-arts. You know - hand-work.


Carolyn Groves was demonstrating needle tatting - next to a table showing her work. Her tatted-beaded necklaces were really fine and gorgeous. We talked. I mentioned that I bought a tatted collar in Prague in the mid-90s. Her eyes lit up. "If it was made with gold thread I bet I know who made it." Evidently the artist published book and was now well-known for his work. Talk about a funny "small world" moment. You have to ask, don't you. 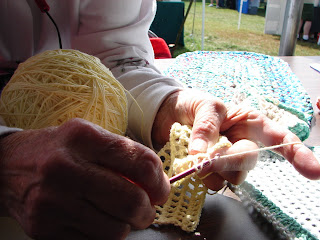 I could have stayed and talked with Elaine Pressman all day. She showed me how to crochet a cotton thread wash-cloth, talked about braiding a rug, and gave me a few tips on the way she had assembled the simple quilts that were near-by. "I started learning how to do when I was 5 years old - from my mother and my grandmother." Yes, her grand-daughters sew and knit. How could they not? Hers are experienced hands. She is a woman of many trades - the fiber arts as well as carpentry. She also told me that she plants and grows a large vegetable garden which feeds her all winter. This woman connects us to our pioneer ancestors. 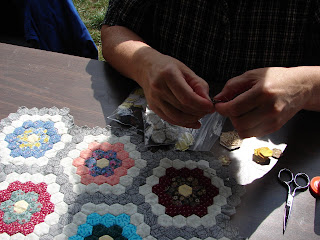 Janice Bell was hand-stitching a paper-pieced quilt. She uses tiny stitches to form the shapes which are then whip - stitched together. "It is small, easy to carry and its very meditative work.


I did buy a bag of recently milled yellow grits. "Its yellow not white because I ground yellow corn." Makes sense. Did you know that - I didn't. I grew up thinking all grits were white - because that's what they sold at the store. And a bag of fresh milled - buck wheat flour. I had forgotten buck wheat flour. Mama sometimes mae buck wheat pancakes. I will be trying those again.

Did I mention we were in the HILLS and that Fall was popping out? It was a warm, delicious day to be outside. Music in the air. Stories being told. And all with a nod toward our roots. 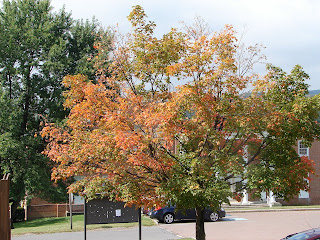 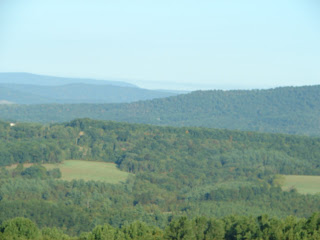 Dawn is cracking.
Jim and I are packing.
Heading out to the Appalachian Festival.
All systems are GO.
Posted by ELLOUISESTORY