(I am using this post to collect memories as aI work on a new story. So, I will come back from time to time and add to it or edit it. Its part of my process. I will change the color of the type so you and I can tell what's new. )

Travelin Oma has a wonderful post about travel planning today. One of her wise items is "expect the unexpected". Now she tells me.

It reminds me of my first trip to Europe in 1975. I have thought about attempting a story around that trip for a long time - this could be the springboard.

I was in my third year of graduate school working toward a Masters in Fine Arts in Painting. I had been studying art history for seven years and had never been to Europe. Washington is rich in art treasures but I was eager to see those other masterworks for real - not just in the Jansen textbook.

Let me explain something else. I returned to College as a Freshman in 1968. The mother of three elementary school children I juggled school and parenting. By 1975 our kids were in high school. So when we decided to go to England for Jim to attend an international medical meeting they were old enough for the both of us to be away for two weeks and - - - for me to stay on alone - to meet a friend in Paris and travel for an additional three weeks. It was a dream come true.

Using Frommer I planned it all. From our two weeks together in London with time in Oxford and the Cotswolds - to my jaunt with Marie. Knowing nothing at all about Europe except the art works I wanted to see, I mapped out a trip - - Paris, to Florence to Rome, to Venice, to Vienna, to Wiesbaden - where Marie lived - and then I would take a train to Amsterdam alone and fly home. Along the way I would satisfy an independent study course on the Color of Turner, Delacroix and Van Gogh - with lots more thrown in.

Jim and I were leaving our kids home so we decided to fly separtately. We arrived at Dulles for the afternoon BOAC flight to London - for me - and then Jim ate and read until his evening flight, also to Heathrow.

When I arrived I took a bus to Victoria Station and then walked to near-by Belgravia where we had a firt floor closet-sized room in an elegant white Victorian converted into a bed and breakfast. Jim arrived six hours later on plan.

For the first week Jim attended scientific meetings during the day and I explored the museums I had on my list and scouted out others to go back to with Jim. To refresh those memories Jim and I sat over coffee at Einsteins and made a list of the most memoriable sights: The Inns of Court - Rodin's sculpture The Burghers of Calais on the green at the edge of the Thames - the Elgin marbles at the British Museum - orderly queques at the bus stop - double-decker bus rides through London traffic - subways three escalators deep - the scenic boat ride on the Thames - the slabs of bacon of a full English breakfast - patterns at Liberty of London - Harrods - Hyde Park orators - Tower of London - The Tate Museum - Turner paintings - and on and on and on.

A side trip to Oxford and then three days in the Cotswolds where our bed and Breakfast was a converted parsonage in a small town. The church was across the road, owls hooted in the trees at night, and all the guests in the dining room were properly British. Shakespeare's Richard III at Stratford was a huge plus as was Warwick Castle.

One night I woke up realizing that I had too much baggage to carry alone when I left Jim so the next day we shopped around and bought an inexpensive patterned fabric zipper toostie roll type bag. I repacked sending half my clothes home with him

When Jim waved good-bye on the platform at Victoria Station in London I realized the scope of my adventure and a tsunami of panic washed over me.

Rough seas on the English Channel brought me to my knees with mal de mare. I had forgotten to bring Dramamine.

I had not expected being in a train coach with no English Speakers on the French train to Paris, misunderstood their directions and got off the subway a block too soon. I wandered lost for about an hour unable to find anyone who spoke English to help me find my hotel where Marie was waiting - and not thinking to hail a cab and solve the problem.

We were staying near the Place de Vendome at a small hotel at the back door of the Ritz. It was recommended by a woman in DC who planned group trips for the Smithsonian. She told me it was a little known gem owned by the Ritz. It was adorable - a miniature of a place - and the room was barely big enough for the two of us.

Our first day in Paris Marie and I stopped by the American Embassy to check out the PX. Marie and David were still in the Air Force and she wanted to check to see if they had better merchandise in Paris than they did in Wiesbaden where David was stationed.

Would you believe it - Marie - in a Julia Childs moment - bought a set of real French copper pots "we are going back to the States in two months. This is my last chance to get these." There was no time to ship them to her home in Germany so we walked out hefting the huge and heavy box and for the next two weeks we shoved that box on and off trains from Paris to Rome to Vienna before we reached Germany and off-loaded them for the last time. Somethimes we shoved it out a half open train window rather than drag it down the narrow train aisle. Whatever - I can tell you that by the time David met our train in Wiesbaden I loathed that box. and, I know that Marie wondered what in the world she had been thinking. 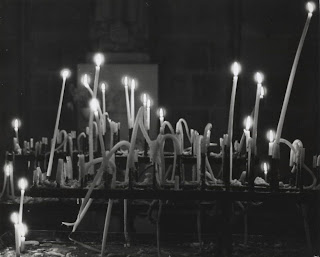 By the time I returned home four weeks later - thanks to the heat, walking and a restricted diet - I had lost 20 pounds.

We were traveling the last of July and three weeks in August. At a time when b and b's were not air conditioned - little was air-conditioned. The coolest place on a hot day was a church - one with plenty of marble.

This picture was taken in Notre dame Cathedral. everything was melting.

FOOD: I don't speak or read French so conversation with locals was "out" and a menu was a nightmare. I finally settled on oeuffs - eggs. I recognized the word,figured they could not alter is too much and that everything about the egg would be safely washed.

By the time we reached Rome ten days later it was hotter. We walked everywhere, sweating and feeling that were were melting. I could not facet pasta dishes with mysterious sauces or any other heavy food so I survived on Caprese - a delicious salad of sliced home grown tomatoes, freshly made mazzarella cheese, fresh basil and olive oil. I love it to this day and its still my first choice on most menus.

Paris to Italy
We stayed in Paris five days and then took an over-night train to Florence.Ahhhhhh! In Florence Art History comes to life. We stayed at the Hermitage Bed and Breakfast - where we had 3 meals a day - served in a rooftop garden that over-looked the Uffizi Museum Courtyard. This was an old palazzo located two blocks from the Ponto Vecchio Bridge. It was a Frommer special find.

Marie shopped. I only wanted to "museum". The Eurail Pass gave us a lot of freedom. One day I took the train on my own to San Sepulchro to see the Piero della Francesco frescos. Wonderful. Town and Art.
Marie was carrying her copper pots and I was lugging a large purse with camera, lenses and film.-- and binoculars to see the ceilings. In 1975 cameras and telephoto lenses were heavy and noisy - the shutter echoed in cavernous churches. Empty rolls of film added weight to the baggage with no clue about the pictures. To be safe I bought postcards - a habit to this day. Reminders of where I have been and the names of the churches.
Posted by ELLOUISESTORY

I love to read stories like this! I'll be watching for updates. (How awesome to have so much time to travel. Five whole weeks!)

Yes, it was a blessing. And, because I was working out a paper and plan for my independent course for the MFA - it was tax deductible - well, parts of it anyway. A two-fer -- -

ELLOUISESTORY said...
This comment has been removed by the author.
7:39 AM

The different colors make this easy to jump in and out of. I do that when I'm editing for my husband so he can check out the parts I've rewritten. Computers are awesome!

I feel silly commenting over and over but I love the additions. We once bought two of those big German electric trains for our sons in Munich and hauled them around with us for another week. I'm sure we could have had them sent home, but we were to cheap to consider it. I can't imagine copper pots!