1. We stopped at the new Biglerville library, registered and were issued our library cards. Having a library card is important to me. I guess its a hold-over from childhood when the only ID I had was my library card. Yesterday I stuck the plastic card in my "card wallet" with all the others. But this one is different. Before leaving - I checked out a book. Now I belong.

2. Fruit Tips:
AS part of our to-town errands Jim and I headed up to Hollabaugh's Orchard Store hoping there were still some peaches in. There were peaches but they were hard as rocks and I want to serve them Monday. Jim wanted to add pears to the bag and they also had a way to go before they were ready to eat. One of the women working there told us:

Peaches: Spread the peaches out in a single layer in the back of your van and leave them during the day. Bring them in at night. We did that. Its working. Jim some back in the car this morning while I will cut the others up. By tomorrow morning we should be well supplied with delicious ripe peaches.

Pears: Different story entirely. The pears are hard and green. She told us to store the in the dark until they turn yellow. Then they are ready. Why? "That's just what you do."

Blackberries: Five minutes across the Carlisle Road you find Yellow Hill Farm where U-Pick blackberries and raspberries. Jim sent me to the thorn less blackberries, bless him, and he took the thorny raspberry lines. Its nearing the end of the season but there were still plenty. The owner recommended freezing the berries by laying them in a single layer in the freezer - and then bagging them in zip-lock bags.
She also gave us a recipe for delicious blackberry sauce. We tasted this on vanilla ice cream and its a simple winner.

Blackberry Sauce: Place berries in a sauce pan: add water until you can just see it. Mash berries lightly. Bring to a simmer; cook for 10 minutes. Strain through cheesecloth or strainer at least 1 hour. Cool. Add 3 TBS cornstarch for every cup of liquid and sugar to taste. Cook and stir over medium heat until the color deepens and the mixture is thick. Serve over ice cream, cake, biscuits, sort cake, any dessert!

Blackberry Pickin'
About 4 o'clock Jim and I decided we would add blackberry picking to our day - yummmm. Yellow Hill Farm is only a five minute drive up and down a rolling and hilly road. The berry bushes are planted in long rows that tower over me which makes for easy picking without too much bending. 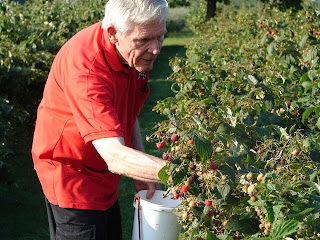 Gallantly Jim handed me a white plastic pail and steered me toward the thorn less blackberry rows while he headed off to the thorny raspberry bushes. We agreed that we would pick berries for supper and breakfast, you know. not too many, just enough. Nodding, we both knew that would never happen. And it didn't. We went home loaded with berries to wash and freeze and eat.

Under a pale blue sky I felt the quiet of a space filled only with nature's sounds., birds calling, cicadas, and the occasional crunching of tires on the near-by gravel driveway. These are the sounds that are swallowed up in the city and suburbs where we usually spend our days.

A cool breeze softens the air. My finger tips stain red as I pull plump ripe berries off the vines and drop them in my pail. Oops, some purple juice stains the rolled sleeve of my favorit Jonesborough denim shirt. Oh, well, I hope it will come out. I feel too content to "sweat it".

Its near the end of the season but the hard red berries I pass over promise we can come again Monday.

Mama used to tell stories of "going pickin" at Uncle Charlie Shaffer's place near Mint Hill or at the Keasler farm in Sandy Springs by my sisters and I never did. The farm experience slipped away. Or did it just get lost to other distractions?

I don't remember anything as fun as this. I hear parents cajoling their little ones on the next row, " we're in raspberry land. Taste this berry. Ymmm. Good."

Sorry I did not know to find some fields for our kids. Well, that's not exactly true. We picked strawberries in Oxon Hill in the blistering hot when we moved to Maryland and lived near Kirby's Farm on Indian Head Highway. The kids and I got chigger bites on all our arms and legs and the red, itching bites reminded us for days that strawberries taste good but that "picking" is hard.

I wonder if Mama got chigger bites? She never said.

".....and the occasional crunching of tires on the near-by gravel driveway."

I have always loved that sound and I don't know why. I think you are the first one I have ever heard mention that, outside my own head.

When I was a kid I use to purposely ride over gravel with my bicycle whenever I came across some in an effort to emmulate an automobile driving over a gravel road. To this day I don't know why the attraction but I loved that sound.