Saturday in the Country and a Candlelight Drama 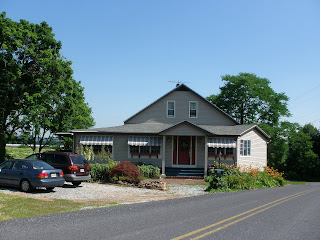 EARLY MORNING
We are spending the week-end at our place - our house by the side of the road - in PA. It was once the club house for a local 9-hole golf course. During the Depression the golf-course went bankrupt, the farmers took back their land and all that was left was the club house and about a half-acre. Over time the wrap-around porches were enclosed to add rooms to the house and it became a private home. The house changed hands many times and finally came into ours six years ago. We wanted a get-away not a work-away. We furnished it with familiar cast-offs and it feels like home.
This morning early sun light streamed in through the bed room window. Nice way to wake up. Sets the mood for the day if I can hang onto it.

One of the advantages of driving up on Friday is a chance for a cheap haircut. At 9 am there is only a two minute wait at the main-street barber shop where Bonnie washed, cut and styled my hair for a fraction of the cost at home - and my new hair-cut looks quite fine.

I always like going to this barber shop. It is a small store front shop with four chairs and they serve men women. No frills - just talk and cutting. People know each other. They exchange local gossip and the latest on the sick and ailing. Usually the room is full of kids on a Saturday morning but not today. I have a chance to thumb the Gettysburg newspaper left on a chair. And find an article about a camera in a live blue bird nest. Take a look.

We have opened windows all over the house to let in fresh air and breezes. The pluses along with that are birds singing and the sounds of leaves rustling in the trees. Very few cars or trucks in ear shot. City sounds on hold.

CANDLE LIGHT DRAMA
This week-end was the last of the Gettysburg Fringe Festival and Jim and I decided to go to town for dinner and one of the programs. We chose the CandleLight at Christ Lutheran Church because we were in the mood for a history program - and Gettysburg is rich with history. Next week brings the 146th anniversary of the Battle Of Gettysburg - a time to remember.

We had a nice outdoor dinner at the Blue Parrot which is on Chambersburg Rd next to the Gettys Hotel and directly across the street from our destination Christ Lutheran Church. All are a half block from town-center square. Actually we selected the Blue Parrot because when we walked by we noticed that the bricked alley between the restaurant and the hotel serves for patio dining. On this warm lovely evening we much preferred the pleasant alley to a dark interior dining room. Cool breezes all during dinner and a parade of interesting people strolling by - without our being right on the sidewalk. The food was adequate and our server was delightful. All in all it was a good choice.

To gather a crowd and set the mood musicians played lively Civil War Era music on the top of the Church Steps. The tunes had a very toe-tapping rhythm and Irish sound. Jim nudged me to notice how all the crowd was moving with the music from a subtle body movement to outright toe-tapping - me too.

The musicians moved inside to the left front of the large square sanctuary and the program began. In the style of entertainments of the day it was a blend of music, recitations and singing. The four readers were in period costume - two women in full-skirted dresses, a Sgt in the Union Army, and a young boy

But the real star of this program is the Church itself - where the drama happened. It is holy ground.

This is the original building built in 1832. In 1863 it served as a hospital which tended Union and Confederate soldiers. 100 men in the sanctuary were lying on planks across the backs of the pews and forty in the basement. The air is thick with ghosts. Ghosts of the injured and dying and ghosts of the women from Lancaster, PA who came with supplies as volunteers to minister to the wounded. They stayed for weeks, living in rooms across the street. A women, in her full-skirted dress, read from the diary of one of those women.

The man costumed as a Union Sgt read from the memoirs of the Union soldier who was actually in this church during the battle. His words describe what it was like, the wounded, the over-stretched doctors, the amputation room in the vestry and how the earth shook during the last-day cannon barrage on the ridge not far away.

In this town of 2400 people every home became a hospital during the seige of Gettysburg and when the Union and Confederate armies left at the end of the battle they left 21,000 wounded and dying behind.

The musicians played rousing troop marching sounds and hymns and we all sang with them. The program closed with everyone standing and singing the Battle Hymn of the Republic. It was a very touching moment.

If you come to Gettysburg I highly recommend this evening. It is re-scheduled during the year.
Posted by ELLOUISESTORY

What a lovely way to honor the memory of those soldiers. Thank you for this post.

We were in Gettysburg one steamy, hot 4th of July, reading about the battles that took place on that date. It must have been horrific.