Ready to Serve - - Check the Reviews 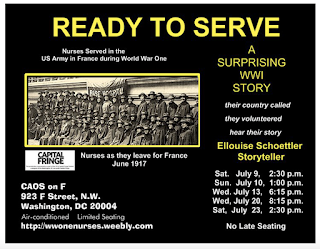 Ready to Serve was premiered at the
2016 Capital Fringe.

Here is what what the critics had to say:

"But this masterful researcher and affecting performer goes way beyond just remembering this brave group of 64 women—she brings their stories to life and honors their forgotten legacy." DCTheatreScene 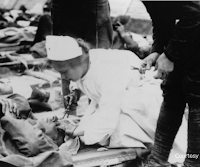 "There is so much detail in the vivid description of the nurses’ lives, from specific patients’ tragic stories to the various ramifications of the biting cold of French winters, that it becomes hard to avoid painting a vivid picture in your mind." DCMetroTheaterArts

"The story is fascinating and worthwhile, a little slice of history that hasn’t received the attention it deserves. Schoetter embodies her character completely, and before long it’s easy to forget that she’s playing a character at all."  DCist

This is my 7th Fringe with a new, original one-woman show and I love it! Fringe is an opportunity for performers to experiment with new material, to try out different approaches and to grow as performers.

This year has been the start of Ready to Serve - the  second story of OVER THERE, a trilogy of stories about women during World War One. Hello Girls began to travel after it's launch and has been seen in eight states. It was a particular thrill to perform The Hello Girls at the National World War One Museum and Memorial.

People are already interested in having Ready to Serve travel. I am excited to say I have been invited to perform Ready to Serve at the annual meeting of the Alumni of the Johns Hopkins School of Nursing, Baltimore, MD in September. Since the nurses in this story served with the Johns Hopkins Base Hospital 18 in France I think of that as a homecoming for them.

Thanks to the Fringe and to all who came to meet these wonderful women who have been lost in the shadows of history.