Back Story for OVER THERE - One

This black and white photo taken in 1952 is the Johns Hopkins Hospital as I remember it when I arrived in Baltimore in 1954.

Last June I took this picture of the original front entrance of Hopkins Hospital. It shows the classic Dome towering over the buildings and the neighborhood as it did the late 19C. Now it still towers over some but it is also dwarfed by modern skyscraper medical buildings that were built after the 1950s.

In 1954 I was 18 years old when I walked up the steps to the front door of Johns Hopkins for the first time. When I entered the impressive reception area it took my breath away. Standing before me underneath the round dome over head was a monumental size white marble statue of Jesus Christ with his arms outstretched and his hands open inviting people to him - Jesus the Healer. It was an unexpected figure as were the flowers on his pedestal. - some fresh: some faded. There was as older woman kneeling on the floor beside the statue with her arm reaching out before to rest her hand on his foot. I was sure she was praying for a loved on. It was the first but not the last time over the past 62 years I have seen people praying underneath that Dome. 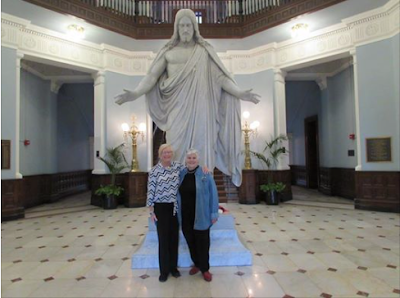 My friend Kay Rutherford and I stopped by the reception room to pay our respects last June when we were attending the Bi-ennial Meetings at Hopkins. We both arrived at Hopkins in 1954 for nurses' training. Kay does have her RN but I dropped out of the nursing school and married a medical student who earned his MD from Hopkins.

Its that early connection that prompted me toward the story of the Hopkins nurses who served in France during WWI with the Johns Hopkins Base Hospital 18. I am loving finding their unknown story. I will premiere the show, Over There, at the 2016 Capital Fringe, Washington, DC in July.

You find stories in so many places, Ellouise. Most of us would not see it, but your eyes are fine-tuned to turn memory snippets into full blown stories.