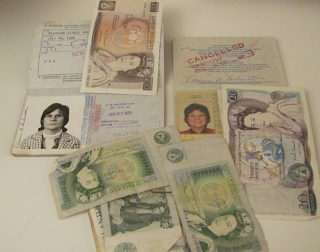 Today when I was searching my file cabinet for a 94 year old letter that is important to a new story I am working on - I bumped into a surprise.

The folder label said "Travel". Even though I knew it would not relate to the main search I was curious. I pulled the "Travel" file folder out of the drawer and am I glad that I did.

Five cancelled US Passports. After I checked their dates and stamps  I opened a red plastic travel wallet which was also in the folder. I was startled to find a stash of British Pound notes safely tucked in it - where they had obviously been waiting for at least twenty years. Found money. Since my last Passport recently expired - I will use this small fortunate find to pay for the renewal.

In the meantime - I am studying the dates on the Passports and the stamped pages for our travel stories.

When I looked at my black and white photo I remembered the day - August 27, 1975 - that Jim and I went to the walk-in Passport Office on K Street to apply for and pick up our new Passports. All done in three hours.

This was just a week before we were flying to London for our first over-seas adventure. I have to think about it a bit to do the story justice when I tell it.

Jim and I were excited. But we were also nervous over leaving three teen-agers on their own at home for two weeks. 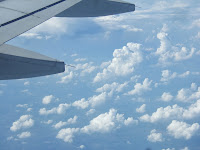 We, like many couples at the time, who were traveling separate from their kids, arranged for separate flights. I flew over on British Air, leaving about 4 hours ahead of Jim. Our B and B was relatively close to Victoria Station so I found my way there and settled into a small intimate room - unpacked and went to sleep. Startled by a noise at the door of our room I woke to see Jim standing in the door-way.  The adventure had begun.

I feel lists coming on as I re-ignite the memories of those two weeks in the UK. And find the pictures.

Those two weeks together with Jim were wonderful and that was also the start of quite a trip for me. Jim went home at the end of the two weeks and I boarded a train for Paris at Victoria station. In Paris I met a good friend and she and I traveled together - for four weeks .
Using a eurail passes we hopped trains from Paris to Florence to Rome to Vienna to Germany. She dropped off the trip at her home in Germany and I went on to Amsterdam for a few days then flew home from there.  I was just winding up my MFA studies at American University and I had made the trip to see all the artworks I had been studying for seven years. It was more than I expected with other side-adventures thrown in. I am looking forward to riding memories and reliving it.

Happy to say there are three other Passports in that file. Stories galore. 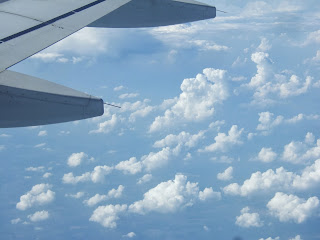