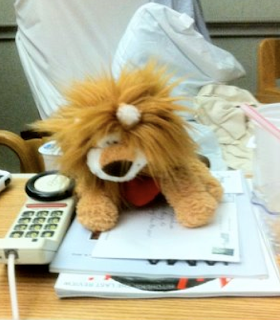 I tell you the people around here are really big on connecting - with each other as well as with folks who live far away.

Their son has set up the televison set so that they can talk to family members and friends from coast to coast on Skype and the iPhone talk program. I forget what they call it.  They have choices. They can dial on something called Skype, or they can use Ellouise's iPad or you know what they talk to pictures on their iPhones.

The other night they called Ellouise's sister in Indiana. She was talking on her little iPhone and they were talking at this end on the iPad.  But it matched up and they were all laughing and enjoying it. Jim held the dog up to see what was going on but they completely forgot about me. That's OK. They were a sight to watch.

This house can  be pretty noisy. Every one of the folks around here has a cell phone of some kind and the phones all play a different tune when it rings.  I have noticed that Ellouise only answers her cell phone. She has started letting what she calls the "Home phone" ring through and then she returns calls later. I heard her tell her daughter, "I am so grateful friends are calling to see how we are getting along and I do want to talk to everybody - but there is so much to do here that sometimes I can't stop what I am doing - right on the minute the phone rings - so I call back. I hope people understand."

Ellouise and Jim both text - and that's by far the quieter way.

Yea, they are settling in. Establishing a routine in a new normal.
Posted by ELLOUISESTORY