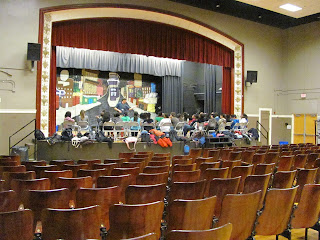 Going through my photos I found this picture I took of the auditorium when Jim and I visited at Piedmont Junior High School in Charlotte, NC last February. I was on a pilgrimage to my past in observance of my 75th birthday.

People who move away from their childhood hometowns are probably the ones who make these kinds of trips to the past. For me as a storyteller its also a way to freshen the memories or find things that I have forgotten.

When I pulled open the side door to the auditorium I was transported across the years to 1949 - 1951. The room has been restored and it looks exactly as it did on the first day of the seventh grade. That felt so good! I remembered when our seventh grade home room danced the minuet for a George Washington's Birthday program. We had practiced the dance for a month and in class time folded pink crepe paper into cherry blossoms to attach to a large limb that became the fabled cherry tree.

Miss Phoebe Reynolds was my 7th grade homeroom teacher. It took me weeks to look at her first name and pronounce it correctly. Miss Reynolds was in charge of the audio-visuals - which in that time was the 16 mm movie projector. Several boys set up the projector, loaded the film and then ran the movie during the class period. I was fascinated by that movie projector. I aggravated the boys until they showed me how to set it up and load the film. When Miss Reynolds saw that I had mastered it she recruited me to their team and I showed the Kotex menstruation films for the 8th grade Home Ec classes. Finally she relented and assigned me to more than the "girl" films.

I told my first true family story in Miss Reynolds class. It was exhilarating to hear my classmates laughing at my father's antics. Never forgot that great feeling. My start as a storyteller.

More memory scraps for my "me" quilt.

How is your quilt coming along?

I think I'm still cutting out pieces, Ellouise, although there are parts of the quilt that are showing progress. I seldom visit the town I grew up in though; so many changes there it is hard to see what once was.