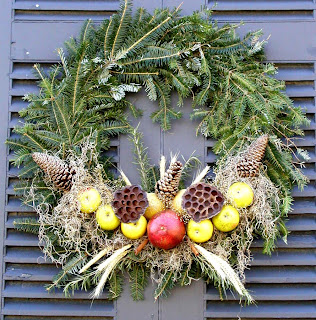 Paying Attention:
Jim and I had our flu shots six weeks ago. We use hand-sanitizer, wash our hands more frequently and take lots of Vitamin C. Ordinarily we would continue to be out and about during the cold and flu season - hoping no germs would settle on us. But things have changed.

Jim's white count dropped last week as a side-effect of the Chemo which makes him a high risk for infection. Jim is not seeing patients this week. We are being careful - staying close to home. He has had several shots to boost the white blood count. We are hoping for some yard passes this week. My sister told me, "stay out of situations where you cannot control the possibility of exposure. And when you do go out - pay attention."

That means me too since I could easily bring infection in to him. So I called one of my Senior storytelling clients today, apologized and cancelled for later this week. When I explained my concern over being with her residents my client was completely supportive telling me it was a good idea to stay away right now. "We have something going around out here." We rescheduled the storytelling until January.

When I hung up the phone I patted myself on the back, "good catch." Then - Oops. I realized I have to cancel my hair appointment tomorrow as well. Close contact with several people is even more chance for exposure. Ouch - - and just when my hair has turned into a fright wig. It looks like bunk hair all over. Its a good thing we are in communicado until I can figure out how to fix it myself.

Star Wars: I have been feeling it coming for about a month. Today was the day. I began my annual pilgrimage to Lucas-world. Jim joined me to watch Episode IV tonight. I should tell you - my devotion to the series only includes the first three films - Episodes IV, V and VI. The later back-story episodes are just too computer-graphic for me. They don't have the heart of the first three. To start is a commitment - because I watch them in order, sometimes all the same day, in this instance I am stretching it out over three days. I will also re-read "The Magic of Myth", the catalog from the wonderful Smithsonian exhibit of 1998 which traced the mythic, movie and cultural influences on George Lucas as he developed the story with a lot of Joseph Campbell thrown in. You could say this is my yearly myth and bliss re-fresher course.

Goes right along with the delving into the Arthurian Legends I am doing at the moment.
Posted by ELLOUISESTORY