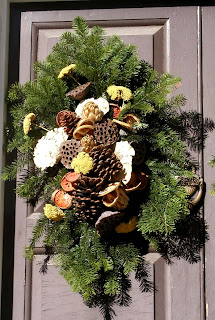 Last week was a week-off for Jim's Chemo but today we are back in the Chemo lab. With the snow, I had worried about the trip downtown because our side street still looked impassable but just as we were ready to pull out of the driveway a snow plow turned into the street with its scrapper down. "This is great." says I. Jim says, " I am not surprised. Yesterday Chris told the guy that I had to leave the house early for my chemo and asked him to pass the word along so that someone would come here first." It took two snow-low angels for this - Chris who set the stage and the smiling guy who came by this
morning.

We spent three hours in the chemo lab. I sat hext to Jim and set up my computer. There were not many patients in today and those that were came and went fairly quickly. While Jim's IVs were running I focused on my work and accomplished quite a bit - redoing a resume and selecting iPOD playlists of stories for gigs in January. Some of the time Jim and I sat side by side sleeping.
A good use of the time, if you ask me.

Tonight Speakeasy was holding an event to celebrate their Podcast Project - Interviews of the City, which was funded by a DC Commission Grant. I am honored to be a part of it. Andrew Hiller interviewed me about my involvement in the women's movement in the 1970s.
Tonight they were having a LISTEN-IN for four of the podcasts and a Q and A afterwards.

Columbia Road was lined with snow-covered cars. The street was bordered by mountains of dirtying snow. Very few parking places had been cleared so I could not believe my good luck to find a parking place directly across from Chief Ike's, a bar where the event was being held. I crossed the glistening street and had stepped over a rough patch of snow onto the sidewalk. Now, within twenty feet of the doorway for Chief Ike's I breathed a sigh of relief, thinking I was home safe. Just then I slipped and my feet flew out from under me. I slammed down flat on my bottom in a pool of icy water from the melting snow. Startled I caught myself with my right hand so that I did not lay flat on my back. A friendly giant stopped, "are you all right, lady? For a minute I was not sure. But I was moving. I tried to get up. He leaned over, took my hand and pulled me to my feet. Icy water dripped down the back of my trouser legs. "Thank you. I think I can make it from here." And I limped into Chef Ike's - cold and wet, with my dignity shattered.

Well, ofcourse I could not stay. My first thought was to get back to my car and head home. I asked for someone to walk me to the car and they did. And, here I am at home now. Dry and warm. And feeling a bit sheepish and embarrassed.

It was my own fault. I was wearing loafers. My boots were at home. Duh!
Moral: If there is snow and ice - dress safely.
Posted by ELLOUISESTORY