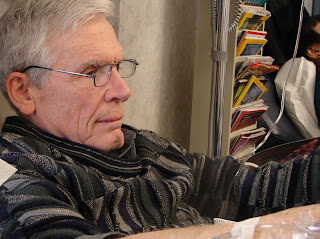 Back at the chemo lab today for Jim's treatment. He has time to read the Washington Post from cover to cover and to complete short workshops to fulfill his annual CME credits.

And along the way - what do you know - I collect another story.

There was a new nurse on duty. She is warm, friendly and very talkative. As she set Jim up for his IV they discovered a connection with each other - her father also was a Psychiatrist; he worked in Brooklyn and was connected with Kings County Hospital - long before Jim interned there ofcourse but what a surprising small world connection. She told us more, "he was a doctor in Europe and when we escaped to the United States he switched to Psychiatry." They came to the US from Rumania when there was persecution of Jews and fear and oppression. She gave us an example: " I was very little and I heard my mother and father talking about something political that happened. My father said, ' it was probably about guns and gold." I held onto the words, guns and gold - I liked the sound of the words. When our maid came I pointed to a large chest and said,'Look at that - its filled with guns and gold.' Fortunately the woman knew my parents and realized it was just a child talking otherwise they could have been arrested.

While the nurse completed drawing Jim's blood she continued with another memory from Rumania.
" I had a dream when I was about 24- long after we left Rumania. I dreamed that I saw my father and mother at our old apartment. They were outside digging in the yard with a shovel. I heard a clink and they pulled a chest out of the hole. When they opened the chest I saw that it was filled with gold. Later I told my mother about the dream - expecting her to say it was "just a dream". Instead, she said, you probably did see us digging like that my dear - but we were burying the gold. We were hiding it not digging it up. That gold saved us. We used it to pay the man who made our passports so that we could leave the country."

Yesterday I heard a BBC radio interview with Welsh storyteller,David Ambrose. He was talking about folktales as conveyers of cultures especially when they are embellished with local place details. He went on to say that when he tells stories in a foreign land he feels he must tell a tale from his own culture - as represntative of his culture.

It occurred to me at the time that when-ever we tell a personal story we are also telling a story from our "land" - representing our personal culture.

Listening to the nurse's stories brought both ideas together for me.
Posted by ELLOUISESTORY

What a nice post, Ellouise. Hope things are going well for Jim.--JD