Friday to Sunday at the National Storytelling Festival

FRIDAY - October 2
Jim and I started out the day with a ten o'clock show.

I have to admit that it was hard to keep my mind focused on the storytelling sets because I was excited and looking forward to the 5:30 Exchange Place where I would finally be on a Jonesborough Stage. 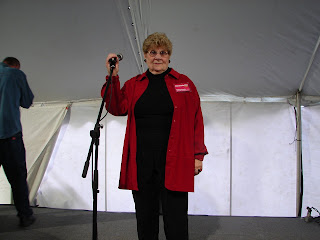 While we were still setting up I stepped up on the stage so that I would have a picture of myself at that mic. (No cameras during a program.)
The tent filled up -1200 people. Some faces stood out to me: my family - Jim, Jimmy. Monica and Juliana, Karen and friends, Susan Gordon, Betsy White, Donald and Letty Nance. They were scattered so I could see them and that was great.

I led off the set and although I had been worried about taking the stage first, I loved welcoming the audience and starting the stories rolling. I told "The Dalmatian Dog" the story of a spontanteous blurt I made at an auction which cost us money - - instead of our marriage. A friend said, "its a very marital story" and it is. Anyone who has been married for more than five years "gets it." The feed-back felt like warm hugs. I had chosen a good story to tell. 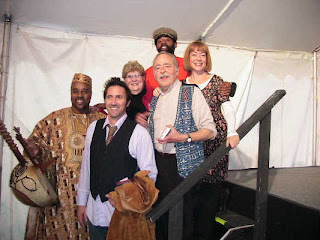 Exchange Place Tellers 2009 - R-L: Baba the Storyteller, Slash Coleman, Ellouise Schoettler, Bob Resier, Tyris Jones, Bernadetter Nason. I was proud to share the stage with them.
After Exchange Place we went to supper with our family, Betsy and her friends, Beth and Joan. It was wonderfully warm to be with home folks as I came back down to earth. Then our family left - going to Roanoke for the night and returning to Chevy Chase next day. Talk about feeling loved. They were great to make such a hard trip - but they have been there with me since I started twenty years ago.

Jim and I finished the day at the John McCutcheon Cabaret which - as we expected - was well worth sitting up late. 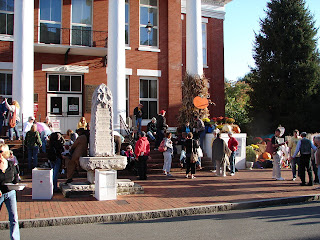 Part of being at the Storytelling Festival is enjoying the town and talking with people.

I also look forward to checking out the "found art" on the alley wall. This collection of boxes and tins is new this year. 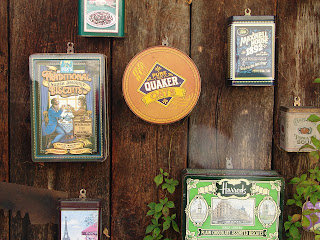 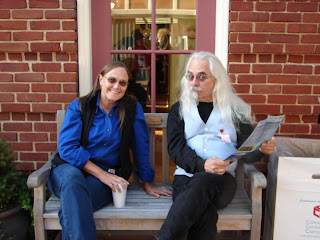 Nice to stop and catch up with storyteller Michael Reno Harrell and his wife Joan. We met last October when we told together at the Grand Rivers Storytelling Festival in KY.


Lots of time spent in the tents. Really wonderful sets with Donald Davis, Kathryn Windham, and
others. I had to take time out to sit with my cds in the MARKETPLACE. Jim took a break and went to our van for a nap.

As an Exchange Place teller I ws given a comp ticket to the annual Yarnspinners greet and smooze party with all the storytellers and donors. It was fun. And - I got to see a rare happening - 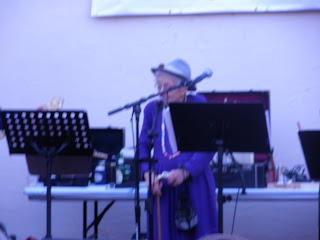 Kathryn Windham at the mic singing with the storyteller band. She was adorable and enjoying herself.

Surprise highlight - the Saturday night cabaret with Chic Street Man - a fine musician and storyteller who played the audience with ease. Charming us all with his stories, mellow voice and command of the guitar. Sitting in the cold, dampness of late evening I knew I was pushing my luck for my voice for Monday but I could not possibly leave.

Sunday Morning.
Train rumbling through town at 8 a.m. Low, mournful whistle. Its the Musak of storytelling in Jonesboro. Cold this morning.

Almost done here. It has been a grand week-end. I will be sad to leave. It has been a wonderful time for me with the thrill of telling from a Jonesboro Stage - dreams do come true.

Jim and I were out early to attend the NSN (National Storyteller Network) awards ceremony. I particularly wanted to congratulate Bob McWhorter, (WVA) who received his award in recognition of the work he has done to foster and support storytelling in WVA. He was a moving force behind the West Virginia Storytelling Festival. We first attended that festival enmasse as a family ten years ago and for four years after - going to Jackson Mill was our family tradition. I told my first stage ghost stories at the open mic at the Friday night ghost stories in the barn - and very important to our family was the warmth and support the storytellers gave our grand-daugher Juliana who also became a regular at the Friday night open mic. Jim and I were happy to be there to applaud Bob and say our thanks for his work. 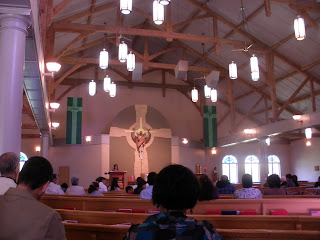 Later in the morning we rode over to Johnson City for Noon Mass at St. Mary's Church.

Back in time for the final afternoon sessions. So long until next year.

Sunday EVENING
The streets are quiet in Jonesborough. Restaurants are closed. Jim and I drove up the highway to the Matador Mexican restaurant where the food was quite good. Then we returned to the hotel early for the evening. We are rolling up our rugs in favor of the comfortable beds.

We have to pack to leave very early in the morning and I have to focus on the hour plus program I will be telling tomorrow at UNC-Asheville which has somehow been a bit dimmed by all the excitement of the week-end. I am looking forward to it but my head is still filled with festival images.

Favorite Donald Davis was in top form all week-end. And it is a privilege to hear legend Kathryn Windham charm huge audiences with her reminiscences of her family and days gone by.

Beyond that I have to admit I spent time talking to people, old friends and new acquaintances more than I sat in the tents. Many familiar faces. My family came since I was telling at Exchange Place, and there were two friends from high school. Storyteller colleagues from MD.
Internet friends. Facebook connections and one woman in the audience, from South Bend Indiana gave me a hug sent by Patti Digh of 37 Days. Tent monitoring buddies from the last couple of years. And strangers who stopped me to tell me they liked my story. this is another aspect of being here - the networking - and reunioning - and forming new memories through the stories. It's a relationship and people high.

I'll be looking forward to a full report!

I am sure this is not the full report you were hoing for - but at the moment its the best I can do. Things run together.

Ah, but snapshots... snapshots capture moments, just fleeting glimpses. But that's enough, isn't it? Enough to spark our imaginations (those of us who weren't there) and enough to spark a story (for you who were). Thanks for sharing these moments and impressions!

I love this Ellouise. Thanks for posting this!
Slash
http://www.twentyonehours.com