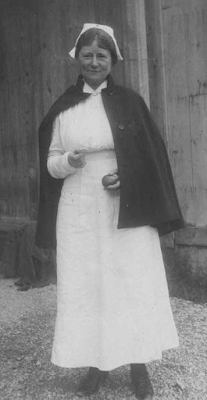 Bessie Baker, a Hopkins Nursing School graduate, Class of 1902, was assistant Superintendent of Nurses at Hopkins in 1916 when she selected as Chief Nurse for Hospital 18. She was 41 years old.

In 1875 she was born into a large family living on the  Eastern Shore of Maryland. She came to Baltimore about 1898 to study at Hopkins and stayed in Baltimore until she left for France June 14, 1917.

In their letters her nurses speak of her as warm, humorous, and good natured while also being a strong leader who expected the best from those who worked under her.

She wrote a report back to the Red Cross on the work at Base Hospital 18 that dealt with the medical work and the difficulties  - "their ridiculous plight" her nurses lived through during in the coldest, brutal winters up to that time in France.

She vividly and poetically described the early Fall landscape and colorful foliage  "the valley blazed in a shimmer of blended color, the wild mustard tawny in the sunlight, the winding Meuse River, the meadows bright with daisies, gentians and poppies".

On a brief sightseeing trip shortly after they arrived in France she reflected  on her visit to the village where Jeanne d'Arc was born.
"In that humble chamber where Jeanne d"Arc first saw the light three hundred years ago, I could not help thinking today of the thousands of women, French, English, and American, going to war for France, though not to the fanfare of trumpets that cheered the Maid to Orleans and Rheims."

After the Armistice was signed and the fighting was ended,  the staff at Hospital 18 gathered for a Thanksgiving meal on November 29.

When Bessie Baker spoke to the gathering,

"In the future when I am asked about the American Army nurses who served in France I will think of you. I will tell them how proud I am of blue-lipped women, heavy laden with layers of clothing, standing near a red-hot pot-bellied stove trying to get warm - and yet doing their very best for their patients.

We came to do a job here, You have done your best and now,  it is time to turn our eyes West as we go home."