Jim and I were in Montecatini, Italy the day the Twin Towers and the Pentagon were attacked. So far from home - - that's another story.

We were fortunate that our daughter sent off a quick email from DC to let us know our family members who could have been in immediate "harm's way" were OK. Then the email connection in our hotel went down. Jim and I wanted to get back home.

As many remember that night the skies closed. No planes could leave or enter the US for some days. Jim and I had intended to leave Italy and meet a travel group arriving from Dulles. Obviously they never arrived - leaving Jim and me bumping around Provence for two weeks until the plane tickets we had could take us home. We prayed, cried, and worried about what had happened - but we were not physically hurt by it.

However  - we were often emotionally touched when French people who were very sad for the United States, the losses, and the stricken families reached out to us. They told us how sorry they were. They wanted to say that out loud to a person. As they took our hands or patted our arms their eyes were filled with tears. Pictures and concern was spread on the front pages of newspapers in many languages. Bouquets of lovely flowers were left on the sidewalk outside the American Consulate in Nice with personal condolence notes pinned to the wrappings.  People also left small candles that bravely flickered in the dark.

I took pictures of those consoling offerings.

Fifteen years later I still see faces of the people and remember their caring for those lost that day and for their devastated families. 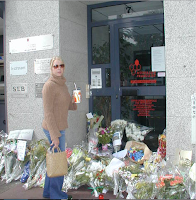 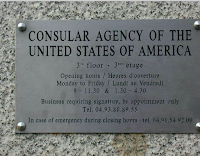 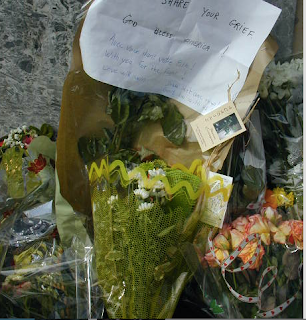 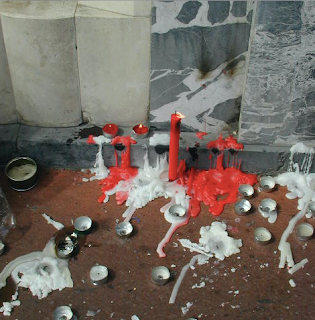 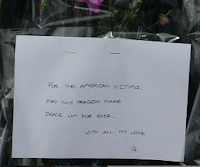 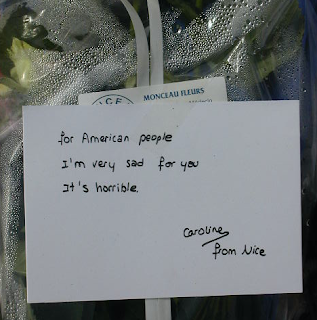 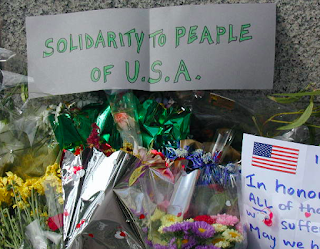