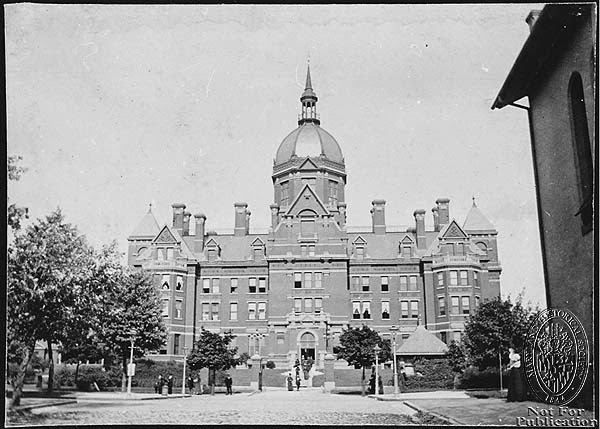 Kay and I entered nurse's training at Johns Hopkins in the same class. It began in September, 1954.  She came from the middle of the country - Denver, Colorado and I had just arrived on a train from Charlotte, NC. We were 18 years old.

Before we each chose marriage and dropped out of training - we once lived on the same hall in rooms next to each which faced North Broadway. From the fourth floor rooms we looked directly at this building - the old, venerated original Hopkins Hospital. It is still there although dwarfed by soaring modern buildings that in some places are more glass than brick.

We both married Hopkins medical students - and our first apartments were a block and a half apart.
We lived in first floor apartments of small row houses that were in the shadow of the hospital. Our sons were born  six months apart- her's being the first of the two.

We have stayed close. We have a friendship that stays fresh even though the visits may be far apart.
We see each other, take a breath and start talking - as though we had just waved good-bye the day before.

All that to set the scene for my excitement. Kay arrives Saturday and she will be here almost a week.

Jim and I last saw Kay and Bob in San Antonio and then they came to hear the stories at the George West Storytelling Festival when I was telling a few there.  It was a sweet visit. Neither Jim nor Bob can be with us this visit -  but they will be much in our minds and in our conversations.

Next week Kay and I are going to Baltimore - for a two night stay. We will visit Hopkins Hospital - a stroll down memory lane - and more.. we are staying in a little known overnight housing for families of patients at the hospital which is a group of row houses on the streets, actually the blocks where we lived when we were first married. We will be staying about a block from where we lived. Once again we will be in sight of Hopkins Hospital.

I am a little nervous about stepping into what could be very emotional territory - however - who else could I possibly do it with?

We will be talking stories that we lived -when we were young and very much in love with the guys we married and made lives with for more than 50 years.

It is indeed a sentimental journey.