A Family Christmas Story - 2: At the beginning

Continuing the review of blogs I have written about celebrating Christmas in our family.

Jim loved Christmas. He was raised in a large family in California surrounded by extended families in the area so he loved to celebrate - even when we were living so far from either family.

I, on the other hand, never really liked Christmas. Some of my childhood holidays are spiced with love and laughter and I prize those memories but many other are best forgotten.  My father was an alcoholic and the Christmas Holidays triggered unhappy memories for him and tension and unhappiness for the rest of us.
Jim's love of the Season went a long way to teach me that Christmas is a time to be happy.

We moved to Brooklyn in July 1957 when Jim graduated from medical school and was assigned to Kings County Hospital in Brooklyn for his internship.


What was bright and shiny for years is now darkly tarnished by 50 years of being wrapped and un-wrapped with newspaper scraps.

In those days an intern's salary was laughable so we planned a very spare Christmas.

The single interns took the duty on Christmas so the married guys could spend the day with their families. It was a swap. Married guys worked New Years Eve. I was grateful and Jim would have hated missing being there for Jimmy's first Santa.

Jim says he thinks we drove to Manhattan after eating, parked the car, took out the stroller for Jimmy and walked down Fifth Avenue to see the animated windows at Saks and then take in the monumental tree at Rockefeller Center.

Storytelling has taught me to watch for the ways life circles back on itself when I work on my personal stories.

Jim and I left Brooklyn in 1958 and did not live in New York again. However after we moved to Washington, DC area in 1964 we went back frequently and usually at Christmas.

In the late 1960s Jim entered training as a Psychoanalyist at the Washington Psychoanalytic School and every December Candidates attended the American Psychoanalytic Society Meeting in New York City at the Waldorf Astoria Hotel. That meeting was always scheduled the weekend before Christmas - not convenient true, but that was a magic time to be in New York. And at the Waldorf - Astoria Hotel with all its lavish Christmas Decorations. On Park Avenue we were a quick walk from St Patrick's Cathedral, Saks Fifth Avenue and Rockefeller Center.
Not to mention access to all the wonderful museums in NYC.

Several Christmases in the 1970s we took Jimmy and Karen and Robin with us so that we could all share the magic - visit the Metropolitan Museum, see a few plays and take in all the sights of Manhattan.

Then one Christmas in the 1990s all our East Coast family which now included our grand-daughters
took the train and spent a Christmas week-end at the Waldorf -Astoria Hotel where we enjoyed the magic of New York City: Rockefeller Center, Radio City Music Hall, Macy's Santa Village and Santa Claus.

I am so grateful it is all part of our family's Christmas stories. Just writing this down prompts me to  remember more and more and know that I will be looking for pictrures later today to see what stories the others remember when we sit down for supper Christmas Eve. 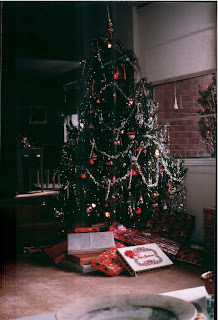 Brierly Road Christmas
Telling the stories of our family stories of Christmas
is the best way to remember and honor Jim and celebrate all he was to us.

Who are you remembering during this Holiday Season?
Posted by ELLOUISESTORY

Ellouise, an evocative post. Of course I am remembering my mother, who loved the holidays usually. There were dark years for her, years when she suffered with depression and other ills, but my memories are not of those times but of our house rocking with people and laughter, food and song. And of course I think of my son Jon and miss him more than ever. He seldom spent this holiday with us because of distance and the uncertainty of travel in the mountains in winter but he always called. I miss his voice, his hugs, and above all his love. Very much.