Last week they "called it" for former V.P. Joe Biden - now he is elect President - - until the ceremony in January 2021 --along with Select Vice President Kamala Harris.
Quickly President Donald Trumpt stirred more trouble with his threats to Select President that he would  not give up his White House office. There were TV reports that he was furious about the way things had gone.
He put his orange hair dye away and now his hair shines fully white. He is not making comments ons  TV or coming out where people can see him.  He has accused others of hiding in the basement - but isn't he the one who is hiding. Several TV speakers on TV said he cannot stand losing.
It has also been said on TV that Trump was not paying attention to the force of the new pandemic surge that is killing many more US people.  Hospitals are being filled; doctors, nurses and others are worn out. They are emotionally stressed as the patients die in their hands. TV programs recount daily so we can hear  how Covid-19 is killing more innocent people and threatening people and families.
Doctors are pointing out again how important it is for people to protect themselves - wear their masks, keep a social distance from each other, wash their hands and the words ring with the announcement -
"don't come together for family gatherings on Thanksgiving."
Doctors and medical workers are counting on people to help - to watch out for themselves, their families, their friends and strangers. 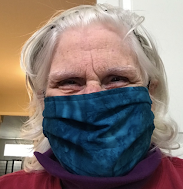