"Giant" is the right word for Texas

This afternoon I was tired so I sat down to relax.
Watching television takes me out of myself and usually, if I am tired,  I select things that don't require any thinking.

When I landed on a Channel and saw the opening scenes of the 1956 movie "Giant" with Rock Hudson and Elizabeth Taylor, I came to a screeching halt. 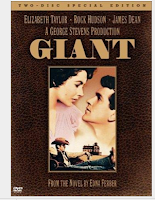 Not that I have not seen that movie. I have seen it many times - and each time loved watching it. Texas is "big" and so it this story.

I remember reading Edna Ferner's novel in the 1950s and being drawn into the story through the plot, the characters and the vivid descriptions. Feeling Texas bigness even though I had never been there and never dreaming that I would live in the Lone Star State one day.

Jim and I were married in 1955 when he was a third year medical student at Johns Hopkins in Baltimore.  By Christmas 1958 Jim had graduated and then completed his internship at Kings County Hospital in Brooklyn, NY so the United States Air Force scooped him up in the "doctors" draft. We had two children, 2 year old Jimmy and 2 week old Karen.

While Jim went to Montgomery, AL to be schooled as a new Officer - a Captain - the kids and I waited out the month in North Carolina with my family.

After four weeks Jim returned driving a brand new apple green Ford station wagon. He told me he bought one uniform and used the rest of his uniform allowance for the down payment on the car.

All this to explain how in February we loaded ourselves, our luggage and our two children into the new smelling station wagon parked in front of my parents home in Charlotte, NC and headed out for San Antonio, Texas for  Randolph Air Force Base and the School of Aerospace Medicine his first assignment. A new world was opening.

We sped down the highways in NC to SC to GA to MS to LA for two days before we crossed the Mississippi River to Texas. It took 2 more long days of hard driving before we saw the first arrows pointing toward San Antonio.

Watching Giant prompts many memories of that long car trip and reminds me how I learned that Texas is BIG.
Posted by ELLOUISESTORY