When it was time to throw these shoes away I just could not do it. We had walked many miles together and gotten very comfortable with each other.

How to save them from the trash bag?

make them into art -

so I spent hours collaging them and remembering our times together. 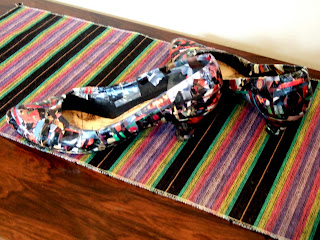 The shoes with heels held me up during my first storytelling performance and many after that.
For a number of years i wore those shoes whenever I needed to be a bit dressed up. 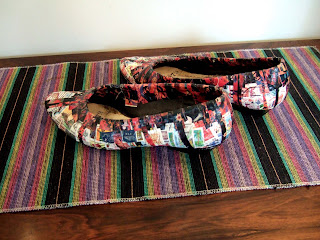 These flat heel shoes walked me through three jobs, held me up to tell stories and carried me most everywhere everyday for quite a few years.

Once I transformed the shoes into art works I did wear them several times when I told stories, especially stories about quilters. Then I moved them from my closet to my studio and packed them away.

Several weeks ago at Pyramid Atlantic Adjoa Burrowes, Gretchen Schmerhorn, and I were working up a new book/story project. My heart leaped when Gretchen suggested we use "decorated" shoes as the form for the book structure. I remembered my old friends waiting in their box in the studio. They would be great start-up examples.

You see why I cannot throw things away?

Doesn't this speak to that point?

Take a look at this tattered and worn sandal. It holds the sources for my story and my book for the class. What if I had tossed it and its mate into the trash bag. 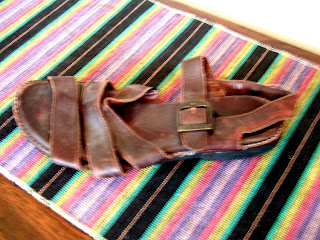 This sandal walked me through Israel, Jordan and Eqypt when Jim and I made our trip to the Holy Land ten years ago. I would like to say that it walked me to the top of Mount Sinai but actually because of a sprained back I rode a camel most of the way and then walked and crawled up the 750 steps to the top. 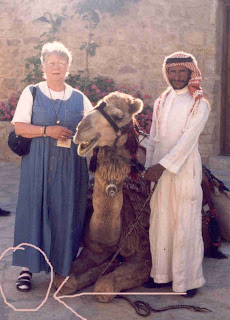 Because our group was to reach the top of Mount Sinai in time for sunrise we all met together at the foot of the mountain at 2 am. Sulieman, the camel driver, and his huge beast were waiting for me as Jim had arranged. Even though the camel knelt down for me to mount his back, he was still too tall for me to climb into the saddle without help from Jim and several others.

I had expected that we would walk along with the members of the group. But no. Not long after we started off Sulieman tugged on the reins he held as he walked along beside us and led me and his camel off the path. "It will be safer here, Madam. He will be more sure-footed."

Sure-footed? To reassure myself I peered down into the blackness at his feet. I could not tell where the camel was stepping or how important it was for him to be "sure-footed" on the side of this mountain because it was pitch dark. I could not see a thing. Except the distantlights of the flashlights the members of my group carried. They were yellow points of light bobbing like fireflies - far away.

And here I was, perched on the top of the camel, swaying as I clutched the front post of the saddle. For two hours I rode slowly up the mountain under an inky black sky which was filled with tiny stars that twinkled like precious diamonds. Once I started to breathe it became a magical, mystical experience.

When we reached the point for me to dismount, Sulieman said, "Madam, throw your left leg over to the right side. It will be more easy for you to slide off."

Throw my leg over. What was he thinking? After two hours I could not feel my leg much less move it. My legs felt frozen in place straddling the camel's back. Fortunately Jim arrived right then and he was able to handle the more private parts of my body as I was hauled off my lofty perch.

There was still the challenge of the 750 steps to the top. But I made it. I was standing next to Jim at the summit when the brilliant orange sun rose in the east - a breathtaking and memorable sight.

A few years later, these same sandals walked me through Greece and Turkey in the footsteps of Saint Paul.

Throw them away. Surely you jest.

These sandals have stories to tell.

This is just the first.
Posted by ELLOUISESTORY

How funny, Ellouise! I was thinking about this very thing this morning--how there are things that even when worn out we hate to toss. Especially shoes. Comfortable shoes are so hard to come by! A pair that's stood you in good stead is like a dear old friend. Kudos to you for finding art in them!