We leave tomorrow for the storytelling gigs in Fresno.
Four days is just not enough time for a visit with our daughter and her family. And, it passes too quickly.

Three boys, 15, 13 and 10, who all play some kind of competitive sport are very busy. It is fun to follow their games. But I have to admit that watching Scotty's team has been the special treat.

Scotty is the 10 year old. When we were here in December his team had just begun their CYO basketball season. Then the boys played with energy and determination. They ran with wild abandon and little fore thought about what was going to happen. The goal was to shoot, shoot, shoot. We arrived Saturday in time to get to a CYO tournament game in Heyward. What a change in the team. 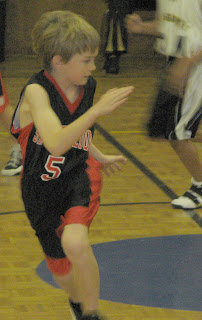 They manuevered plays, real well-thought out and planned plays. They worked as a team and they were very effective. The coach had put in a lot of time training these kids and it had paid off. They did not win their game, true, but they played really well. And, they did not dispair over the loss. Took it in stride - knowing there is always, "next year." Wow!


Breakfast this morning with Jim's college room-mate. Good laughs and the joy of shared memories and stories.

Two days ago Jim made two pots of a hearty vegetable soup. It has been perfect for the cold and rainy days. We feast and feast and the pot stays full like the magic pot of the fairytale. But this is not magic. Jim keeps tinkering with the crock pot - - adding more broth and other goodies. He can keep a pot of soup going for days.

Grandson Jamie is adding another movie to my iPod - The Return of the Mummy. Great airplane fare.

I am not ready to leave.

If only I could be in two places at one time.
Posted by ELLOUISESTORY