We got an early start for a bit of touristing so that we could be back home in time for me to take a nap before I have to perform tonight at Grand Rivers. I was grateful for the nap-time. The antibiotic is helping but I have really been feeling lousy and coughing during the night does nothing for restful sleep.

First stop - a new recycling station set up in a barn like building that you drive through. They have it set up for maximum efficency - no holdinh up the line - I barely had time to catch a picture - or the noise.

We stopped to admire the monument figures at the point where Lewis and Clark are supposed to have crossed the Ohio River.

Then Jim and I toured the River Heritage museum 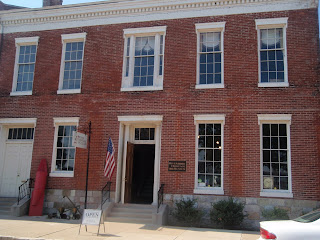 which is housed in the oldest building in Paducah. Interesting exhibits about the River, transport and industry, and about the devastating flood of 1937 when the Ohio overran its banks and inundated the town. After that they built the river wall.

Lunch - always take time to eat. Ann introduced us to her favorite barbecue stop. Take my word for it - very good barbecue and a real home-town flavor to the place.

After nap and a snack we set off for Grand Rivers. Tonight I needed to be early to gets settled, lighted and wired-up.

Highway 24 crosses the Tennessee River on the way to Grand Rivers.

I was driving when I saw the twin bridges coming up. There was no place to switch drivers so Jim agreed to try the video on my small digital. Oops, we forgot that the camera picks up sound too.

For the second night of the festival Kim had set up a three person line-up. Kaci Bolls, me, and Michael Reno Harrell.

Kaci is a Nashville singer and songwriter who was to perform for 20 minutes, leaving me 40 - 45 minutes to complete the opening half of the show. Michael Reno Harrell, also a singer-songwriter as well as a storyteller would complete the evening with an hour of songs and stories.

Before the show we settled into the performers' area backstage - which I loved. A sitting area and two dressing rooms - one for men and one for women and each had a private bathroom. I was delighted with having facilities so close-by. The sitting area gives performers a chance to visit as well as to relax. 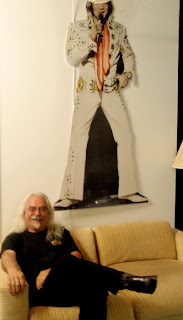 You can see Michael settled comfortably under the life-size Elvis.

I really enjoyed the dressing room. 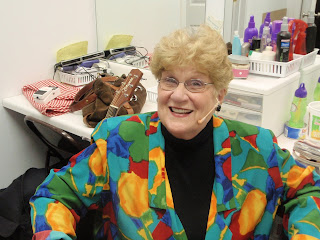 And the chance to visit with Kaci and ask her a bit about being a songwriter in Nashville, "Do you write from pain or sweetness?" It opened a chat about how sometimes the songs come from either place - initially more from pain and as you go on from a better, sweeter place. Not so different from storytelling. Later I pulled a stool into the wings so that I could enjoy her performance. A lovely young woman, she has a strong and good voice and her songs have something to say. She has what it takes and I hope she makes it in the music business. ( You can see and hear her for yourself on You Tube.)

Re: Ellouise's stories. When I walked out onto the stage I was relieved that I had asked for the lights to be adjusted so that I could see the faces in the first three rows and in spots on the side wings. "are you ready for stories?" They called back, "yes." I had decided to tell personal stories.

I opened with "The Wedding Dress" a story about a wedding dress I bought for my daughters in a thrift shop in California - a mother's mistake. People relate to the story - thrift shop shopping is common coast to coast and establishes a good bond. My second story, "The Tatooed Man", is a true story about a double amputee vet of the war in Iraq. This story was given to me in a doctor's office waiting room and I have hispermission to tell it. Its funny and touching. My third story, "The Dalmation Blurt", is really Jim's story and I like to introduce him and thank him for letting me tell it. Oh, its also my story - about my $550 blurt at a charity auction that could have cost a lot more than money except that Jim's forgiveness saved the day. The audience came with me in the stories - and that is such a great feeling.

Michael Reno Harrell is a stiking figure on stage with his flowing white hair. he tells stories of growing up in NC Appalachia as lead-ins for his songs. He has a fine voice and sure fingers on his C.F. Martin guitar. I loved hearing him talk about his guitar which had traveled the world playing at USO shows before he bought it.

Michael has an easy and informal style which captures the audience and brings them into his engaging stories. He took us from his early mountain boyhood home and a hair-raising bicycle ride in one story to freezing snow drifts in Boston in another and we all went with him willlingly.

On a personal note: I particularly enjoyed talking with Michael and his wife, Joan, when I discovered they have a strong Charlotte connection. Small world took over when Joan told me she had lived on Clement Avenue for many years - that's in my childhood neighborhood - one of those streets I usually re-visit when I go "home". Talking with them ignited many memories. For instance when he told me that the Visualite Theater is now a music place and he has performed there - I remembered that I had sung from that stage myself - when I was six years old - for one of those Saturday kid-talent radio programs which were popular in the 194os. Don't you love it? Meeting somebody from the old neighborhood across times and out of state.