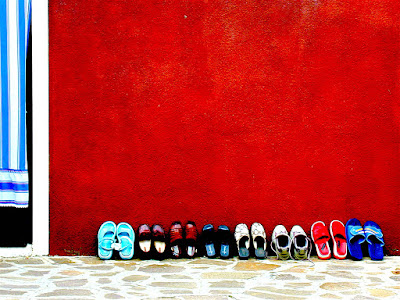 In 1983 I captured these shoes on a hot July afternoon when Jim and I strolled slowly through narrow streets in Burano, Italy. We escaped schedules and our time was our own. A wonderful memory of the month we lived inVenice.
Posted by ELLOUISESTORY 1 comment: 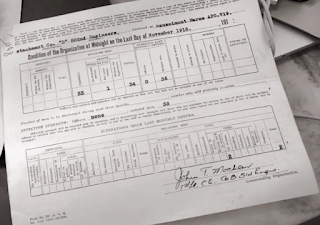 This week I had a very exciting afternoon at the National Archives. My son Jim found this bit of paper which finally tells us when and where John Walter died in France in 1918. A huge leap to finally pulling his story together. It's one of those finds when you just tremble with excitement .... and I always have tears at finding someone. I also think of Jim ..... he loved this kind of detecting!!! 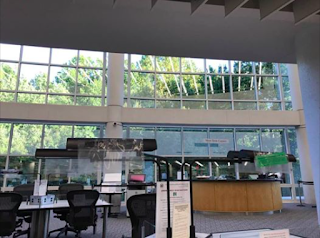 One of the research rooms at the National Archives-- a spacious light filled place that is really excellent to work in. Great space and all the technology you could want to help you with capturing the information.

Twenty years ago when I started my genealogy searching I worked in the old building downtown. I loved it there for it's traditional connections but the space was tight and the narrow windows kept it dim. I finished one long cycle with genealogy and gradually moved on so that today after a twenty year gap I was no longer in the "system".

That was no surprise and the treat was quickly getting a new researcher badge which is your entrance access to it all. Its like a feast has been spread out on the table. I love it - feel back in a familiar saddle and plan to ride quite a lot.

Today searching into the past  is different from my early days. Going to the Archives is rich and its exciting. There is so much to dig through. But if you keep at it you can accomplish a surprising amount at home with you laptop comfortably on the kitchen able  - - or where-ever you like to work.

I have armed myself with internet subscriptions to Ancestry.com and to Newspapers.com. I am sure there are other sites too. And of course there is google which often comes through with some surprises. 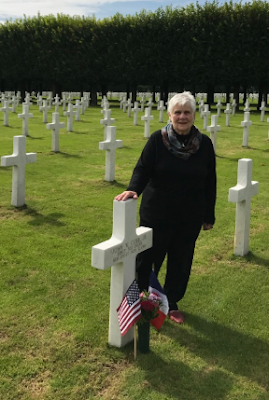 After our visit to the Archives I was itching for more information without going back this week so I spent time with my tools and came up with riches. Learned more about John Walter's death, yes, but the real new treasure was finding
fresh information about his younger brother from identifying his boat transport to and from France and later to visit John Walter's grave in conjunction with the American Legion Gathering in Paris to honor the 10th Anniversary in 1927.

To my surprise all this information led me down a the new path of learning about how the Army organized and accomplished the disinterments of soldiers buried in formal temporary graves for the
journey home or to a permanent Army Cemetery in France once the family decided.

John Walter is buried in San Mihiel American Military Cemetery.
The week that John Walter died so did two others in the same hospital. The records show that the three men were transferred and buried side by side in 1918. In the end in 1920 two were moved to a "funeral ship" to come to the Unted States for final burial and John Henry was assigned to San Mihiel.  I was startled to discover that one of  the two is buried at Arlington. I know where he is resting and some his story.

Grateful to be working with Genealogy and Storytelling.


A Childhood Memory - Hope you are saving and telling your stories.

I loved Elizabeth School and was quite happy in 2011 to be invited to tell this story - a bit longer than this version - at the school when they were celebrating their 100th anniversary.

There was a lot that had changed but the First Grade room was the same and the auditorium looked exactly as it did when I saw it for the first time. 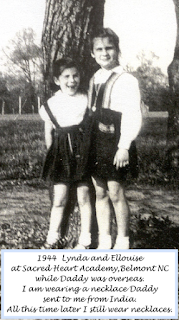 The Day I Started the First Grade  HERE
Posted by ELLOUISESTORY 3 comments: