From James Bond to Meteora 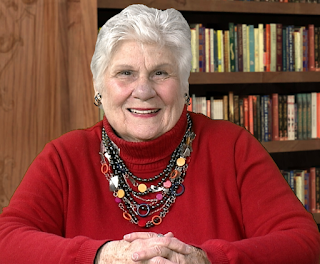 Last week I called a friend in California to "catch up". We had a great conversation that took us stepping through memories and then we backed up to a trip to Greece and Turkey we made more than ten years ago.
When we were talking about it I could not remember the name of a particularly memorable place. Neither could she recall the  name.
Last night I fell asleep while I was watching a Netflix movie. When gunshots woke me up about 2:20 am I realized another movie was playing. I was now watching Roger Moore in the 1981 James Bond movie "For Your Eyes Only". Bond was using ropes to pull himself high up an emense rock face to reach a monastery perched at the top. One look at the monastery sitting high on the rocks and I called out into my dark and empty bedroom - "Meteora".  Knowing the name now released flood of fabulous memories.
Glad I can share these CNN pictures.
Our group's first stop that day was a busy work shop were artists were painting religious icons. Beautiful work.
We were invited walk around and watch the artists doing their painting. We also looked through the completed works that were "for sale" and selected a few to buy and take home.  Then we all returned to our bus. Once we were settled in our guide, Father Larry Boadt, reminded us that "our next stop is Meteora". I was surprised when some of our group sighed deeply.

When Jim and I  prepared for this trip we were so busy getting ready we did not study the itinerary. I had no idea about Meteora and no clues about what to expect. We did not AH!!!.

Shortly after pulling back onto the asphalt road the bus turned into a smaller road that almost immediately began to move up. Our bus squeaked loudly as it climbed slowly up the narrow steep road and the landscape shifted dramatically from flat green fields to rocks, huge boulders rising out of the earth.  I whispered to Jim, "where are we"? He did not know either. I felt like we had shifted  into a different world. I clutched Jim's hand because I felt some uneasy fear as well as being amazed by the awesome views.

Later after touring the monastery our group gathered on top of one of the large flat boulders and our Fr. Boadt, said Mass just below one of of the elevated monasteries.

It was quite an experience.

Recovering the name of the place and the memories is a wonderful gift.
Posted by ELLOUISESTORY No comments:

September 24, 2017 while researching on the internet  I found a letter from France published in a Talbot County, Maryland newpaper on September 22, 1917. Even though they edited out the writer’s name and location to protect her and the American troops, I recognized her as one of the Hopkins nurses I tell a story about in Ready to Serve.

From the paper:
A Talbot County nurse with an American Army Hospital in France wrote Dr. Davidson at the Easton Hospital an interesting letter. Among other things she says, "This is a wonderful country. They seem to have all the crops of fruits and vegetables which we have at home. Their season is quite a little later than ours and in August it is as cold as we have it in October.

There has been so much rain this summer I think I could have counted on one hand the days it is not raining since we came. But also we have such sunshine. One hour of it makes up for the whole day of clouds. It is so warm so and satisfying.
The children are bright little things but the elders are sad. There are only a few men to be seen other than those in the blue French uniforms.

Recently every woman is in black. Even very young girls wear veils which touch the floor.
Their feeling towards us Americans is amazing. Everywhere we are acclaimed with cheers and tears of joy.”

(During our visit to France September 6, 2017...we seldom saw men women or children working in the fields today and certainly no
Men in blue except for a few village statues where the soldier's uniform was painted blue) 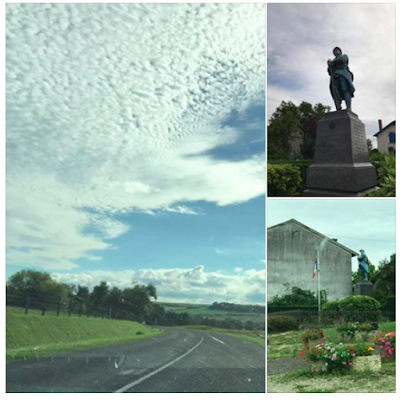 It has been exciting, very busy and exhausting since I wrote the last blog post. 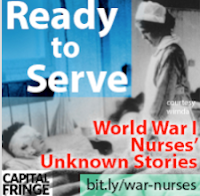 On August 28th when I put on my "poppies shirt" and went to Johns Hopkins School of Nursing in Baltimore to tell Ready to Serve, the story of the 64 Hopkins nurses who went to France during World War One. The audience came to their feet applauding at the end so I knew they liked it. That felt good.... 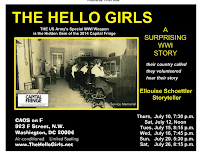 Two days later my son and daughter and I flew to France for  an eight day to visit to the areas where the  Hopkins Nurses and the Hello Girls had worked during the Great War - - - and to visit the grave of Sgt. John Walter Cobb, our ancestor-uncle,
who is buried in San Mihiel American Military Cemetery.


Just writing that down shocks me with how idiotic it was to try to cram so much into eight days - two  of which were flight days. Topped by the fact that we were coming and going from Brussels Airport - four hours from our hotel in France.