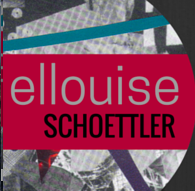 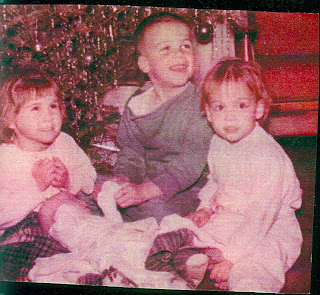 We celebrated every year - from baby activities, group cakes, fire engines, ponies, and anything else that worked with the schedules or required a trip to get there or telephone calls.

Gretchen left us when she was three and we brought cookies
to
Arlington Cemetery
where she had been for so long until Jim came to join her. 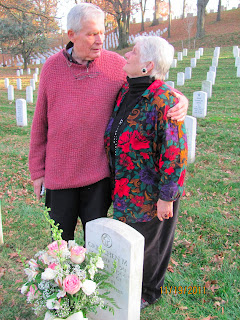 Flowers for Gretchen on her 50th B-Day.

And, there is space waiting for me in our forever home.


An African folk tale, The Cow Tail Switch is a golden nugget for me. In the story five sons find their father’s bones in the jungle where he was killed by a wild animal when he was hunting. They conjure him back to life. The story ends with the wisdom, “no one is truly dead as long as people tell his story.”  Ellouise Schoettler

My aunt, Catherine Diggle Brown is very much on my mind these days. Koki is gone, buried in Wilmington, NC, next to her husband Jim Brown but she is not forgotten.

In 2007 Koki's son George walked into my Halloween program smiling and holding up a gift for me. He was carrying one of Koki's quilts, the one she had given to me just before she died. When she offered it to me the last time I saw her I just could not take it - it was too much a final good-bye.

"Is this the right one?" he asked. "Oh, yes. That's it." I had snuggled down under it several times when I spent the night in the cozy guest room in her apartment in Charlotte.

The quilt is made with a simple design. Nine rectangles across, 12 rectangles down - 108 rectangles - sewed together at random. I remember when she made it. Someone gave her a box of drapery fabric samples, pre-cut into rectangles.

Koki believed in recycling. She studied about those pieces for awhile and then decided to piece them together for quilt. Vivid colors, flower prints, stripes, patterns, solid colors, paisleys - colors of the late 70s - pinks, turquoise, blues, yellows and golds. Full of life and joy - just as she was.After she organized and stitched them together she added black stitching
The scalloped black lines make those colors work together. Its machine stitched except for the hemming. I love seeing Koki's hand in her tiny, neat stitches around the edging. Those hand stitches keep me in touch with her.
Later, at home, I spread it on the bed - mostly on my side. And slipped in under it.

My Jim does not mind. He loved her too.

We are both glad that she is with us.

About Catherine Diggle Brown  - from Find a Grave

Catherine Diggle Brown, 84, of Charlotte, died peacefully March 4, 2001, at Greenville Memorial Medical Center, following a period of declining health. She was attended by her children.
Mrs. Brown was born April 24,1916, in Charlotte, daughter of Samuel Lewis and Mary Louise Cobb Diggle of Central Avenue. She attended Central High School in Charlotte, and graduated from Sacred Heart College in Belmont, N.C.
In 1942, she was accepted into the Women's Army Auxiliary Forces. She was the 42nd woman from North Carolina to be allowed to enlist in the Army in World War II. She was promoted twice, and was commanding a training company in Ft. Des Moines, Iowa, where she was honorably discharged following a service related disability, at the rank of Captain. She was a member of the United Daughters of the Confederacy and Disabled American Veterans. After World War II, Miss Diggle married James A. Brown Jr., who served from 1950 to 1962 as Assistant Administrator of Greenville General Hospital, and from 1962 to 1970 as Administrator of Gaston Memorial Hospital.
Mrs. Brown is survived by their three children, James Arthur Brown III of Cary, N.C., George Conril Brown of Washington, D.C., and Catherine Elizabeth Holmgreen of Greenville; three grandchildren, Amanda Leigh, David Joseph and Elizabeth Styron Gault; a brother, Samuel Lewis Diggle Jr. of Charlotte; and sisters, Mrs. Carl Lowery of Charlotte, and Mrs. Carl Duncan of Indian Rocks Beach, Fla.
Mrs. Brown was a member of St. Vincent dePaul Catholic Church in Charlotte.
A visitation from 6 to 7 p.m. followed by a Rosary will be held Thursday, March 8, 2001, at Harry and Bryant in Charlotte. Mrs. Brown will be buried with her late husband in Oakdale Cemetery in Wilmington, N.C.