Life Happens Off Your Calendar

You know the saying "life is what happens OFF your calendar." We are living it.


Our grandson Danny flew to Dulles from Oakland, CA two weeks ago -on his own- for a summer visit with us. The plan was so simple. A direct flight back and forth - no problem for the twelve year old to make the trip on his own. It worked well with his older brother last summer.

Then, several days after he arrived in Washington the terrorist alert flashed to orange when a plot was uncovered at Heathrow ariport. Flights stopped. Airport regulations for passengers changed immediately. Airpots sprouted long security lines, careful scrutiny of carry on bags, and lots of confusion. We changed the original plan and booked tickets on Jet Blue - while we could get seats - so we could fly back with Danny rather than wave good-bye from outside the security check-in.

Okay, I admit it - I was not thrilled at the idea of the flight. So I turned my focus on the good things about an unexpected week in California - - a visit with our other grandchildren, some quiet time with our daughter, and a quick visit to the Valley to see Jim's family. You now, all the reasons you plan a trip.

Saturday was a beautiful warm and sunny day with clear untroubled skies. Our family drove us to Dulles to see Danny off. As we walked across the asphalt from the parking lot to the terminal my cell phone rang. It was my cousin Jim in NC. We opened on a cheerful gambit and then he came to the business of the call. "I am in the emergency room in Concord, Ellouise, with your Mom. She fell and has broken her hip. The doctors are seeing her now." I sat down on a near-by bus stall bench to catch my breath.

My mother is 91 years old. She lives in an assisted care facility near my youngest sister in Concord, NC. At that moment that sister was in Raleigh, delivering her daughter to college, I was getting onto an airplane headed for California, another sister was last known to be in Billings, Montana, where she and her husband were in a rental car discovering a new part of the scenic West, my brother was at home outside Atlanta and the last of our five was in her car on the Interstate headed to the emergency room from Siler City, two hours away.

After much angst and several phone calls for updates on Mama's situation I decided to stay on our plan and go with Jim to take Danny home. As my sister said, "I am here. Mama is in good hands. Nothing is going to happen right away."

Once inside the Dulles terminal the first thing you notice are the insistent loudspeaker directives. "Unattended baggae will be removed. If you see unattended baggage report it immediately to an airport employee or security guard."

Our daugher Karen noticed a four foot gray plush elephant sitting quite alone near the the baggage carrousel. She looked around for a child, a teen-age girl, anyone who might belong to this obviously unattended stuffed animal. When it was obvious it was alone, abandoned - that over-size cuddly elephant began to look quite ominous. Karen first told a baggage handler. Initially he did not hear or comprehend her report. And, then when he did, he looked briefly toward the elephant and said, "oh, OK" and continued on his way pushing a train of baggage trolleys toward an unknown destination.

Karen was not satisfied.

About that time the loud speakers blared out another warning: "report any unattended baggage to a security guard or airport employee."

Karen spotted another guy wearing an airport shirt and ID badge. Once again she pointed toward the gray elephant - still sitting alone and unclaimed. They looked at it and exchanged several words. "Oh, yeah." he nodded and walked away. At that point we decided to move on and get as far away from the orphaned elephant as we could.

We were followed by the echoing announcement: "report any unattended baggage to an airport security guard or airport employee. The airport security level has been raised to orange." Karen just shook her head as we walked away. "yeah, right."

Later on the plane I noticed a man with an obviously brand new baby on his knees - a beautiful new life dressed all in pink. The baby slept peacefully at 36,000 feet and her father looked at her with new love in his eyes. " How old is your baby?" "twelve days old." Lovely.

I thought of the continuum of life - this little girl just entering the world and my mother perhaps preparing to leave it.

And what about the grey elephants loose in the world?
Posted by ELLOUISESTORY 2 comments:

This time twenty years ago we were waiting for a call from Munich to announce the arrival of our first grandchild - Juliana. Now, here she is - a lovely, poised young woman. 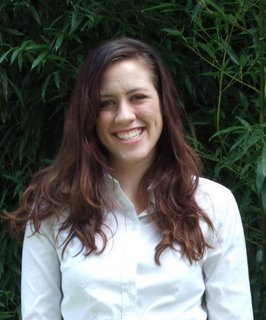 It is somehow comforting to find the same familiar and irrepressible kid just below the surface. 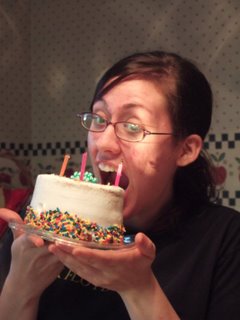 Tonight we went to an early movie in downtown Bethesda. We wanted to see Little Miss Sunshine. SOLD OUT. So we settled for Scoop. It was definitely settling. I over-heard a woman say, "Wow, Woody Allen is back." Yeah, he is - looking very tired and using the old jokes from all his other movies. Remember when a new Woody Allen movie was an "event."

When we came out of the theater the area was Saturday-night-hopping. Music was blaring from a near-by restaurant. The sidewalks were crowded with folks strolling in the balmy evening. The bright moon overhead was just another plus.

We crossed the busy intersection and bumped into a long line. What's this? Thirty or forty people lined up, waiting for a chance to peek into the lens of the biggest telescope I have ever seen. It was set up on the sidewalk outside Barnes and Noble. We stopped. Wouldn't you?

What are you looking at? The man who had just turned away said, " Jupiter and you can see the 4 moons." We looked into the dark sky and all I saw was what looked like a pretty big star. Bright, yes, but nothing unusual.

We fell into the back of the line and waited twenty minutes for our turn.

The telescope was 250 magnification. In the small lenses I saw a very bright moon and off to the side and above it - 4 very small moons. A glimpse of Jupiter on Woodmont Avenue on a Saturday night.

"How often do you do this?" I asked the man, the owner of the telescopes, the amiable guy who kept adjusting the scope for people. " Oh, maybe every six weeks or so."

"Thanks."
Posted by ELLOUISESTORY 3 comments: