Vigilante 1 from Ellouise Schoettler on Vimeo.


This is the story I told as an "opener" for Bernadette Nason's House Concert last week.
Posted by ELLOUISESTORY 2 comments:

Goosey Gander at the VASA Gathering. 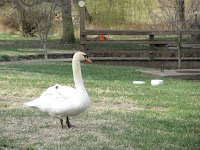 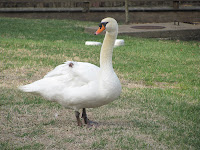 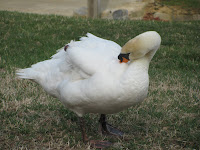 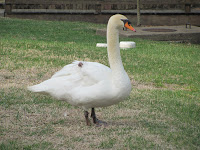 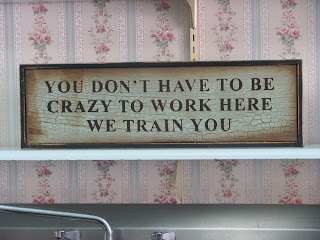 Loved this sign in Betty's Sandwich Shop on Main Street in Shepherdstown, WVA.
Ever worked some place where that was true?
Posted by ELLOUISESTORY 3 comments: 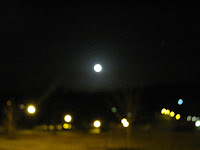 Wow - what a fabulous moon!

A Bit of Memory from Ireland 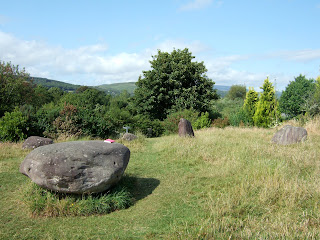 Jim and I went to Ireland to water our Irish roots and honor our ancestors.

We decided to join an Elder Hostel tour group thinking it would be educational and fun. It was a mistake. It did not really work out well for us because instead of meeting many "local" folks we ended up trapped in a bus with one Irishman, a professor who loved the sound of his voice, and a group of Americans. If there was any fun I missed it.

But we saw interesting bits of Ireland.

In Kenmare one evening Jim and I walked out on our own and came upon this primeval "ring of stones" set on the edge of farm lands. It seemed a magic place and we had time to linger and take pictures and just sit quietly and imagine ------
Posted by ELLOUISESTORY No comments: 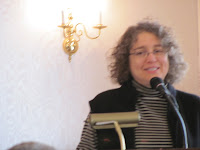 Fanny Crawford, President of the Washington County, MD League of Women Voters is also a storyteller so its no surprise she worked out a way to bring "story" into the League's celebration of Women's History Month. To give the line-up a bit of a spin she invited two professional storytellers and two elected County Commissioners.

Think of it - storytellers and politicians sharing the microphone - that makes for lots of good stories.

We celebrated women - our history, gains and losses. looked at today with cautions and concerns - be aware of what's happening and vote responsibly.
The session ended with a reminder -
- women's stories are the stories of our families. They are our legacy to our daughters and their daughters.

But don't think only we four told stories. Women shared their memories and current concerns. I will particularly remember this story. A woman told of her elementary school teacher years ago - who told her class that the day of the first women's vote she was sick in bed. Her father wrapped her in blankets and drove her to the poll in a horse drawn carriage so that she could be part of the historic event.

My mother was only 8 years old  that day but she remembered how important it was and she never missed a chance to vote - and always told me it was "your duty"- "your privilege".
Posted by ELLOUISESTORY 1 comment: 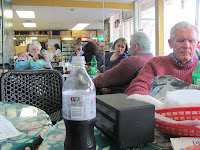 Thursday we had a leisurely lunch at a favorite sandwich shop in Walnut Creek.  Nice time together before Jim and I left on a late evening plane - returning home after a very lovely two weeks in California.  Family, grand-parenting, storytelling, touching base with special long-time friends. We loved seeing California from North to South with stops in San Francisco, Los Angeles and Fresno which is in the San Joaquin Valley mid-state. Making new memories while being warmed by a kaleidoscope of bits of the past.

The Rogue Performance Festival is held in Fresno - which is Jim's home town - making it an ideal place for me to tell my stories because there is also so much for Jim there. But the ultimate draw to the West Coast for both of us is the chance for time with our daughter and her family who live near San Francisco. We have had time to talk, be with them, watch middle-school basketball, and catch up with the "dailies".  On the storytelling side - Robin, who has done so much to help me with the launch and promotion of Pushing Boundaries finally saw a "live" performance - although she knows the program backwards and forwards. 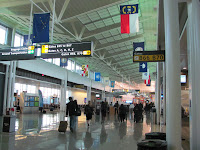 We boarded a Jet Blue flight in Oakland and 4 and a half hours later we stepped out into the concourse at Dulles Airport - a thirty minute cab ride from our front door.
Home.
Within a couple of hours Jim and I were sound asleep in our own bed!!!
Today - its back to the real world.
Unpacking, laundry, and - sorting through the piles of mail - most of which will be tossed. Junk mail is inevitable.
I have a feeling that - even though I am working - this is going to be a night gown day - just because it can be.
Posted by ELLOUISESTORY No comments:

In the 1970s at the Washington Women's Arts Center we artists learned how important it is to "catch' comments and reviews and document your work. At the time no one was doing it for women - so we learned to do it ourselves.  Although these comments were on the Rogue website you can't count on how long it will be archived. So, I am capturing these for my records.

Kudos to the Rogue Festival for making a place for folks to write a comment. These were posted on the Rogue performing Festival website. 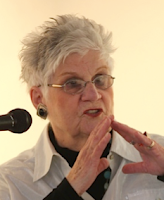 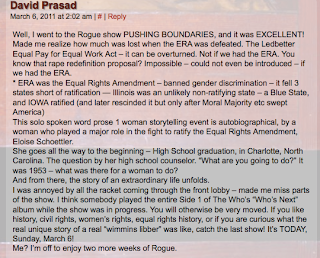 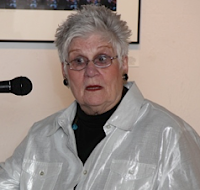 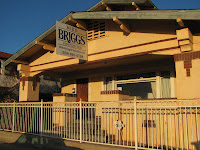 This 1920s California style bunglow is the unexpected location for the Central Valley Talk Radio broadcasting station. When I walked onto the porch I wondered what I was in for. Well, behind that unassuming front door - - a first rate tv operation for the internet. And I learned something about a different way of filming and broadcasting video than the more commercial Channel 16 I am used to.

This afternoon I was a guest on Chuck Leonard's show, Central Valley Buzz - which was featuring Rogue performers. I had no idea what to expect - or maybe I thought it would be a bit like my interview show - a rather conventional question and answer slot - with a chance to promote Pushing Boundaries.


Well - as soon as I met Chuck I knew there would be nothing conventional about this adventure. 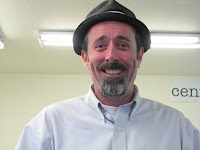 Chuck bounced into the back-yard garage studio behind the 1920s bungalow - energetic, cracking jokes, and verbally sparring with those of us waiting to go before the camera with him. His hat - a trademark I imagine, lends an impish touch to his persona. I liked him - but I was a bit nervous - not knowing how a conversation about the Equal Rights Amendment would go - and bantering on camera is not in my comfort zone. 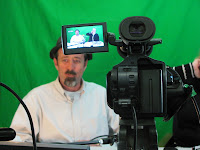 Fortunately I was not the first interview in the line-up. His first guest is a veteran guest of the program. She is also a film writer and director who could hold her own in exchanges with Chuck and as I enjoyed their friendly sparring I thought - "just go with the flow and throw out a few questions of your own - you can do this."

And I could.  By the time we had been on camera a few minutes I 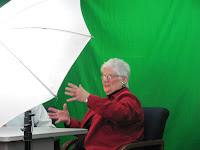 began to have fun. That makes all the difference. Once I relaxed we could have a conversation -
It also helped that I am comfortable before the camera - after five years of talking into one at Channel 16 in Kensington. And I have a hunch that this role-switch from interviewer to being interviewed will help me improve my own game with the Stories in Focus interviews. 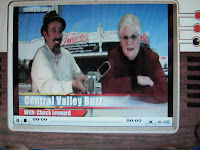 Then came the surprise. Performer Lynn Ruth Miller called in. I met Lynn Ruth at the Rogue three years ago - found her funny and delightful - a woman in her 70s making a good career as a stand-up comedian and storyteller. We keep in touch.
She did not call in to talk with me. She did not know I was on the show. She was making the call to keep her name out there until she gets into town Saturday. This woman knows how to market her shows and she does a good job of it.
But - we were happy for the "call-in meet up" and surprised Chuck that we knew each other and could banter ourselves. No contest really - Lynn Ruth is funny and I ended up doing more laughing than talking. But that was OK. It fit the show format. 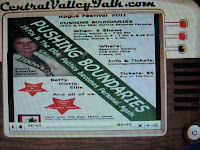 I never did get to "push" Pushing Boundaries - but thaht's OK. I had given the tech-guy a PDF of the poster and I knew he would add it to
the show.
I decided being part of an entertaining show was a good thing - and I was having a good time. Hopefully anyone who sees the program will like me enough to come to my show.
There are some TIPS here:
1. Go with the flow - let the Host manage the show. Be a good guest.
2. Be grateful for an unexpected surprise - like Lynn Ruth's call - it could make a more interesting interview.
3. Always bring a video clip, slide, or some other visual that they can add to your interview
I was fortunate - because I was also going to have some printing done - I had a flash drive with show graphics on it . You can bet I will always have one with me from now on.
4. Follow Lynn Ruth Miller's example - promote your shows.
Posted by ELLOUISESTORY 3 comments: 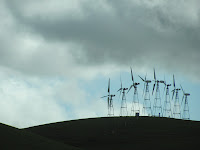 Jim and I are in Calfornia where I will be performing Pushing Boundaries in the Rogue Festival this week. We began our CA trip with our daughter who lives near San Francisco - time to catch up with her and her family. Today we packed the rental mini-van and headed South, first to Madera, Jim's home-town to see Family. Tomorrow we go on to Fresno for full attention on Storytelling and the Rogue Festival. 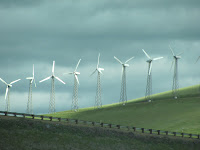 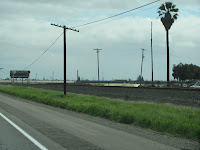 Once you turn onto Hwy 99 the land flattens out. 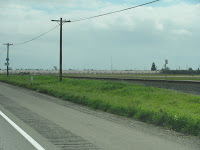 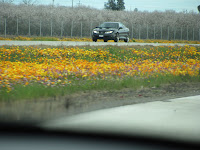 Bits of a California Day. 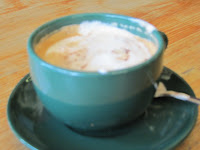 Glimpses of California on a day in the sun cruising Hwy 680 to Fremont. 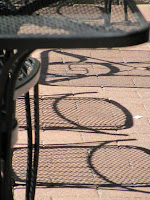 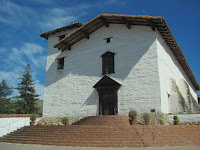 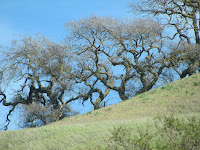 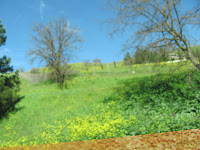