Wish it were a brighter day for travel. Jim and I are off to Wilmington, DE for the 4th Annual Lower Brandywine Storytelling Festival. Going to listen and laugh. With Willy Claflin, Bil Lepp and Andy Offut Irwin leading the line-up I know we can count on fun and good laughs. It will feel GOOD!!!!!

More about it later and I hope some decent pictures.

Later - the pictures aren't great - but considering that Jim and I were sitting in the balcony - a great view by the way - I was asking a lot of my camera. 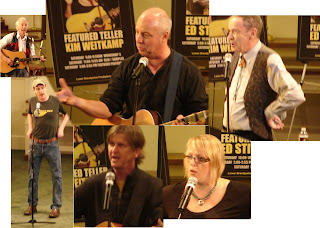 This was quite a rich storytelling day. Imagine it, Williy Claflin, Bil Lepp, Andy Offut Irwin, Bill Harley, Ed Stivender and Kim Weitkamp - all in one day - in solo sets and shared sets and in some instances some shenanigans as well.

When storytellers have a fine audience who respond to the stories, get the jokes and just send out love - the stories shine. And there was a lot of shining at the Lower Brandywine Presbyterian Church in Wilmington, DE today. And can you imagine it - it was all free to the community. 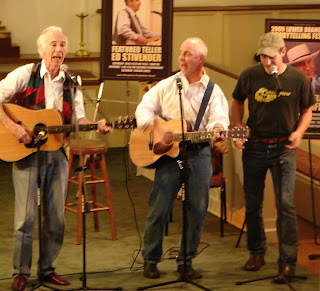 The setting also influences how things go. This church is old - historic. It was first organized in 1720 - 56 years before the American Revolution - we are talking deep roots. The present sanctuary was built in 1860. The Storytelling Festival is part of their annual series of cultural and entertainment programs and is offered to the community as a GIFT.

Members of the congregation volunteer through out the Festival and create a warm and inviting presence.

The small church lends an intimacy to the gathering that is often lost in larger venues. The warm, friendly, story-loving audience welcomes spontaneous shenanigans - - like Willy Claflin, Bill Harley and Bil Lepp sparking some improv by sharing a set and other kidding around. The audience really positively responded to - you could say encouraged - these three colleagues and friends playing together on stage. 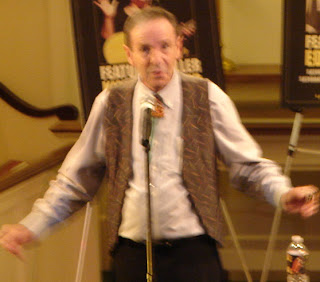 Ed Stivender will always be a personal favorite for me because he was the featured teller at the West Virginia Storytelling Festival ten years ago when we experienced a festival of storytelling for the first time. We got bit!!!!! And I am always grateful to Ed Sitvender for spreading so much of the magic that week-end - and every other he is part of.

Bill Harley's set where he shared his love of Mo Town music and taught the audience to be his back-up for the Foundations hit song "Build Me Up Buttercup" was wonderful. He gave it humor, adolescent memory and emotion and let his love of the music carry the story and tie it all together.

Kim Weitkamp telling new stories which step away from the comedic and move to touching your heart instead of tickling your funny bone.

The stories are a big draw for storytellers when they attend festivals with the PLUS of meeting up with colleagues from all over the place. So other highlights for me were:

Visiting with storyteller Charles Kiernan, Mark Twain of Bethlehem, PA, over a hot dog in the church social hall. I was sorry to miss his set Friday night but having seen him portray Twain at the Lehigh Valley Festival a couple of years ago - I know it was a classy act. He deftly introduces you to Twain himself and his material. Cool.

Chatting with Slash Coleman during supper and talking about the DC Fringe - Slash is a seasoned veteran of the Fringe circuit and NEON MAN was very successful in DC last year. He will be back this year with a new show. He convinced me to get my application in the mail - that the DC fringe would be a good venue for my ERA story.

Slash and I both told at the Exchange Place at the National Storytelling Festival in October so it was fun to tell with him again in the Open Mic line-up. Its fun to use the Open Mic to try out different spaces or test stories in new locations. I told the Tattooed Man - and in the telling experienced first hand what an inviting and comfortable space the church is for storytelling.
Posted by ELLOUISESTORY