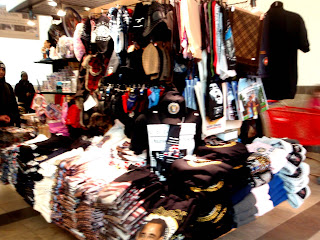 I am not one to go down to the Mall but I would have liked to wave to the historical train which carried Barack Obama and Joe Biden to Washington.

When I watched Obama's speech in Philadelphia yesterday tears were streaming down my cheeks. I was born and raised in the segregated south and was part of early integrated student gatherings in the 1950s. I have tried to follow Dorothy Height's admonishing - if people are missing in a room - ask why. I really never believed the first African American President would be elected in my lifetime. Living in history.

I cannot imagine how African Americans, especialy the Civil Rights activists, must feel during this Inauguration. Its the realization of a Dream.

You see Inauguration souvenir stands everywhere. This one was in the middle of Wheaton Plaza when I went to pick up my new glasses. The range of stuff is amazing from buttons, hats, key rings, shirts of all kinds, gloves, you name it they have put Barack Obama's smiling face on it. And people are buying it. CNN commentator Roland Martin said, "Barack is boosting the economy with his face plastered on everything they can think to sell." 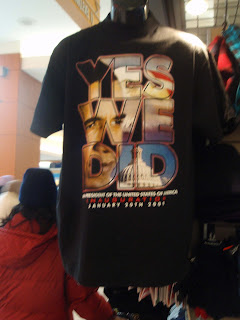 I liked the design on this T-shirt. But no, I did not buy it.
I wanted to but I kept thinking about what I already have in my closets.

But I did not pass up a few buttons for my collection. 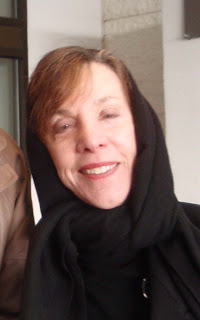 Small World. This woman from CA and I struck up a passing conversation as we walked away from the souvenir stand. "I came from California to be here for this. I would not have missed it. I will be downtown tomorrow." I could not resist. "Where are you from?" "San Francisco." I went on - "Our daughter lives in Lafayette." "Actually we live in Orinda.(a neighbor town to Lafayette) What's you daughter's name." I told her. "I know her." We did a minute about that and how and other local bits and we agreed, "Its a small world."
Posted by ELLOUISESTORY